How to talk to Girls at Parties review: Mad, bad and boring to know

Cannes 2017: There’s a lot of latex and little sense in this punks and aliens caper 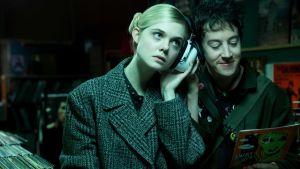 Unearthly: Elle Fanning and Alex Sharp in How to talk to Girls at Parties

Film Title: How to Talk to Girls at Parties

Oh for goodness sake. We all like stuff that is “mad” and “fun”. Life would be unbearable without such things. John Cameron Mitchell, creator of Hedwig and the Angry Inch, is, however, counting too much on our passion for mad fun in his largely appalling quasi-musical take on a short story by Neil Gaiman. It’s mad like an attack of the runs. It’s fun like a party in a storm drain. How do such things come to be?

The script imagines a party of aliens landing in Croydon 40 years ago and ingratiating themselves with a band of young punks. It’s hard to say which is less convincing: the punks or the aliens. I’ll go for the former. Mitchell proves to have a tin ear for the culture and the era. What we appear to be looking at is “punk rockers” as represented in a contemporaneous British sitcom. Imagine an episode of Terry and June in which the suburban couple were inconvenienced by Roger Revolting and Vanessa Vomit. That sort of thing.

Alex Sharp does his best as Enn, an archetypal young introvert, but the Chinese-whispered version of punk is so laughable his efforts prove futile. Does one of the pseudo-Damned numbers really end with a musical quote from The Beatles? It does. Yes or Emerson, Lake and Palmer could hardly have been less suitable. The less said about Nicole Kidman’s turn as a punk matriarch – Frank N Furter by way of Pauline Fowler – the sooner that actor can go back to enjoying her renaissance.

Meanwhile, the aliens look to have escaped from an evening busking badly as living statues in the local park. Nobody is having more “fun” being “mad” than the distinguished costumer designer Sandy Powell. There’s a lot of latex. There are many primary colours. There is absolutely nothing to suggest travel from other planets.

The story hangs around the relationship between Elle Fanning’s girl who fell to Earth and Sharp’s budding storyteller. Somehow or other she teaches him how to become Neil Gaiman. Along the way galactic apocalypse is averted. So muddled is the storytelling that it proves hard to care how either of these things takes place.

Still, it’s totally fun and completely mad. That might be enough for some people.