How To Be Single review: a film that dearly needs a good, stern talking to 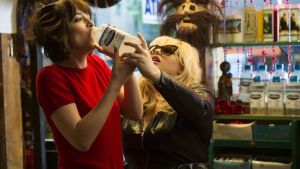 Film Title: How to Be Single

Here’s a film that dearly needs a good, stern talking to. There’s so much to cherish and laugh at in How to be Single. Okay, one of the four female stars is the reliably lifeless Leslie Mann, but each of the others is an ornament to the era.

Look at Rebel Wilson chewing her quips to mush and spreading funny sex about the place. There’s nobody better than Alison Brie at quizzing the world with a lopsided brow. Dakota Johnson has survived 50 Shades of Grey – two hours as the world’s dimmest punch-bag – to hone a shy hipness that might impress even her formidably cool grandmother (that’s Tippi Hedren, if you haven’t been paying attention).

The lewd Wilson and the faltering Johnson form a gorgeous complementary partnership that causes one to long for them to be cast in a better movie. The sequence in which they stumble about the city, readying themselves for the working day after a night on the town, surges with an anarchic momentum that earns the first-class punch line it eventually encounters.

What a shame the film is filled with such filthy reactionary lies. The title itself is a fib. You are, of course, not taught how to be single. One may as well expect mainstream Hollywood to teach you to make a dirty bomb from household supplies.

Christian Ditter’s film begins with Johnson parting from her boyfriend and embarking on a period alone in New York City. The rush for independence lasts about two minutes before we are once again cast back to the sexual politics of the Mughal Empire. Being unmarried is shameful. All social life is directed at sexual ensnarement. There is no middle- ground between permanent pairing and wild libidinous abandon (we must be either lobsters or bonobo monkeys).

In short, the one thing you are not allowed to be in this world is “single”.

The Call of the Wild: Harrison Ford in one of his most engaging performances
6

Zoë Kravitz on High Fidelity: ‘A lot of white men who identified with the book think it’s theirs’
7

Colum McCann on Israel-Palestine: ‘I was completely ignorant of what was going on’
8