She’s got an acerbic wit, frequently speaks her mind, and has burned almost everyone at the Golden Globes: so how did Amy Poehler become Hollywood’s most-loved? 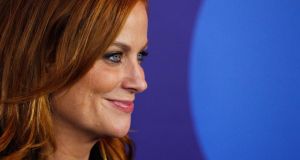 Amy Poehler: ‘Oh, we were real Irish-American. This was Boston. That meant Jesus, JFK, illustrated pamphlets on St Patrick. Lots of beer and lots of potatoes. That’s the Irish-American version of it all. Ha ha!’ Photograph: Brendon Thorne/Getty Images

The word is that Amy Poehler has jet lag. Busy on promotional duties for Pixar’s lovely Inside Out, in which she voices the personification of happiness, the American has barely had a chance to stretch since landing in London. A passing minder notes, however, that: “Amy on jet lag is like the rest of us . . . ”

I am shuffled in before the sentence is finished, but the sense is clear: Ms Poehler will not be dozing off.

She certainly looks poised for action. Poehler sits cross-legged in the centre of the plush sofa like a hip yogi: hair now copper- coloured; upper half sheathed in a Who T-shirt. The sense of coiled energy is palpable.

“I was just in Ireland!” she enthuses.

I heard. She was given a gold medal from the Philosophical Society in Trinity College. By all accounts, her speech kicked nine colours of bottom.

“It was awesome,” she says. “I had spent two months in my 20s on an exchange programme at the Abbey Theatre. And I stayed in Trinity. It was amazing to go back 20 years later. Dublin is now crushing it. The city feels so ahead of the game.’

In the years I have been doing this job, I have rarely, after telling associates who I was about to meet, encountered the sort of enthusiasm that Amy Poehler generates. “Oh I love her!” they say. “You’re so lucky!” Perhaps best known as the psychotically positive Leslie Knope in Parks and Recreation, Poehler has somehow mastered the art of connection. We all feel we know her.

“That’s a terrible thing to say to somebody,” she laughs. “I am Irish, you know. We like to be the underdog. Look, that’s very nice to hear. But for me to even comment on that would be too weird. That’s your job. But it is nice to hear.”

It’s a peculiar one. Poehler can certainly take an acerbic tone when the material requires it. In recent years, she and her great friend Tina Fey have helped transform the Golden Globes from an awards-season backwater to a boozy festival of snark. But, when hosting that ceremony, she also gives the impression of a decent sort allowing herself a rare slide into abrasiveness.

“The great thing about the Golden Globes is that people can drink,” she says. “And they are seated at round tables. So, they can look at one another. That’s very helpful for comedy: round tables and drinking. The Irish have known that forever.”

When it was announced that Poehler was to voice Joy in Inside Out, most sensible people felt the casting was so appropriate as to be near inevitable. Who better to represent positivity than the woman behind the irrepressible Leslie Knope?

“That’s great. But one theme of the film is that it’s okay not to be happy all the time. Most of us aren’t, and that’s probably good news. The pursuit of happiness is a very American thing and Joy is a very American character: ‘Quick! Hurry! Let’s not think! Keep going! Everybody follow me!’ Look, nobody is who . . . erm . . . I don’t know what people expect me to be and I try not to think what they expect of me.”

Let’s sort out the Irishness. Poehler’s dad has German, Portuguese and English blood, so you won’t need to be told that she gets most of the Hibernian juices from her mother’s side. Maternal great-great grandparents made their way to the US from Co Cork. There are also ancestors from Sligo. As she explains it, every box in the checklist was hit.

“Oh, we were real Irish-American. This was Boston. That meant Jesus, JFK, illustrated pamphlets on St Patrick. Lots of beer and lots of potatoes. That’s the Irish-American version of it all. Ha ha!”

Both parents were teachers, but they reacted with equanimity when, after attending Boston College, their daughter drifted towards Chicago and the improvisatory geniuses at Second City.

That company could be seen as the Harvard of comedy. Bill Murray, Gilda Radner, Mike Myers, Stephen Colbert, Tina Fey: the list of distinguished alumni would fill a phone book.

“Yeah, I loved Bill Murray and Gilda Radner,” she says. “So, I thought: how did they do it? I just stood in their giant footsteps and trudged along.”

Like so many of the best SC people, Poehler next moved to the fecund comic hothouse that is Saturday Night Live. She arrived on the TV show right after 9/11, and will now admit that a degree of political caution set in following the attacks. But, as the decade progressed, the atmosphere shifted and Poehler found her place.

At this stage, Poehler was just a little overshadowed by the unstoppable Fey, who co-created 30 Rock. The stealth success of Parks and Recreation changed that. The first series of the show, which goes among bureaucrats at a parks department in Indiana, was virtually ignored, but it built a following to become a genuine phenomenon.

The day before we meet, she received an Emmy nomination (her 14th) for her turn in the final series. Poehler responded to inquiries from the New York Times with a hearty: “Fuck yeah!”

“You bet. And I said you’d better write it all out. Don’t you asterisk me. And I say ‘Fuck, yeah!’ to The Irish Times too. Fucking A! We were triumphant and super-surprised.”

Now divorced from the actor Will Arnett, with whom she has two children, Poehler, still just 43, is nicely poised for a further surge forward. At the end of the year, Sisters, starring her and Fey as siblings, opens as tasty counter-programming to Star Wars Episode 7. Her recent book, Yes, Please, did nicely indeed. The intriguing, star-packed satire Wet Hot American Summer: First Day of Camp will be on Netflix next week.

“I love that I am getting to do different things all the time,” she says. “I love that I work in so many different ways. I am happy with the weird twists and turns my career has taken. I really wouldn’t change anything.”

Would she not? Few people would say that.

“No, no. All of it feels like a lovely slow climb with a talented ensemble. A lot of readiness, luck, timing and . . . bribes. Hee! Hee!”

I’ll point out that she laughed.

Inside Out opens Friday July 24th