Gunda: The uncomfortable truth about how a sausage is made 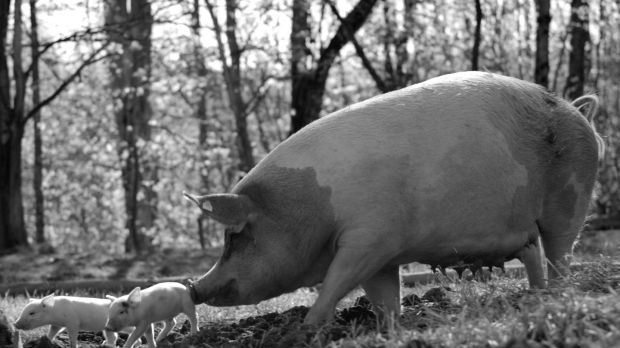 Joaquin Phoenix, among the world’s most prominent vegan campaigners, is merely an executive producer – and that can mean anything – on this wonderful documentary concerning the life of a charismatic Norwegian pig; but, with that in their minds, viewers will know not to expect an unqualified paean to the bacon industry.

Victor Kossakovsky’s film is not any kind of polemic either. The film does not deal with the horrific norms of factory farming. Gunda (God bless her) seems to be treated with relative respect. She gets to roam freely. Her litter looks to be a well brought-up bunch. But even the most enthusiastic rasher fan – facing truths they normally suppress – will know this story can only end badly.

Kossakovsky, a versatile Russian documentarian, is not in the business of anthropomorphism. Working with no voiceover and no surging incidental music, he offers blank monochrome shots of merry suckling, outdoor walks and days spent snoozing in the door of the pen. At one worrying point, a piglet gets lost in the straw and looks to be in some danger.

The illusion of a disinterested camera is well maintained throughout, but audiences – those not raised on farms, anyway – will find it hard to resist imposing human characteristics on the animal stars. The mother as teacher. The mother as disciplinarian. The mother as nurturer. Such palimpsests are there for those who want them. Only viewers with the hardest hearts will fail to make a hero of the one-legged chicken who, like an avian Ulysses, undertakes an arduous journey on another part of the supposed farmland.

There is artifice at work here. Though we are mostly with Gunda in Norway, the finished film also incorporates footage shot on farms in Britain and Spain. A version of the pen was constructed that better suited the placing of camera equipment. But there is no suggestion that any lies are being told. Gunda gives a fair representation of an environment that, despite us seeing no humans, is largely fashioned by human hand: fences, troughs, tractors.

The denouement is all the more poignant for it coming in less violent fashion than we may have feared. It is painfully sad and it goes on and on and on. There is plenty of time to ponder the morality of our dominion over the beasts.

In cinemas from June 10th