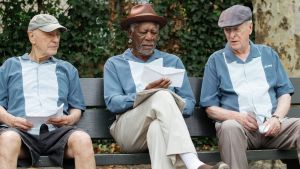 Alan Arkin, Morgan Freeman and Michael Caine have had some pension troubles.

Indulge me while I consider one insignificant moment in this largely dreadful grey-pound caper flick. For no reason that makes any sense, the superannuated heroes decide to prepare for a bank robbery by shoplifting from the local supermarket. (Is this not like preparing for a heart transplant by playing a quick game of Operation?) While fleeing a store detective, one of their number knocks over a massive pyramid of Spam. I’m betting that the last time this happened Norman Wisdom was fleeing Jerry Desmonde in Trouble in Store. Ha ha! It’s funny because it’s lazy.

This is another of those films that pretends to show older people respect while actually treating them like comic nincompoops. You know the sort of thing. They don’t know how technology works. They forget where they are. They have to go to the loo a lot. Ha ha! It’s funny because it’s patronising.

Morgan Freeman already travelled this road in the equally wretched Last Vegas. We will get establishing scenes that confirm the boys’ unfortunate circumstances. They will decide to do something madly inappropriate. That will lead to redemption.

This time round, the guys – Freeman, Alan Arkin, Michael Caine – are frustrated ex-employees of a firm that has just squandered their pension plan. Meanwhile, slippery banks are playing con games with mortgages. Like creakier versions of the brothers in Hell or High Water, they decide to rob the bank that treated them the least well. You could, if you were bothered, see it as a Trump thing.

Derived from a barely remembered 1979 picture, Going in Style deserves some praise for a clever reversal of the “what’s happened to this neighbourhood?” whinge. Caine’s granddaughter patiently explains that, far from going to hell, Brooklyn is now safer and more gentrified. But this is dreadfully clunky, achingly predicable stuff. Take a cigar if you guessed they’d seek a laugh by having an old lady say “fuck”. Take another if you predicted that, to secure a 12A cert, the script would allow just one use of the word.