Godzilla vs Kong: Monster mash-up a cut above the rest 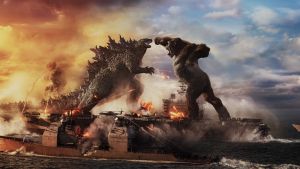 The MonsterVerse franchise (yes, it really is called that) has, to this point, had an erratic history. Gareth Edwards’s boring Godzilla unintentionally offered a case against swinging such a project towards dimly lit reverie. In startling contrast, the smashing Kong: Skull Island – all Creedence Clearwater Revival and jungle hell – convincingly argued that art should always aspire to the form of Apocalypse Now. Godzilla King of the Monsters could only have been more irritating if it had been scored to massed bagpipes.

It looks as if we may be enjoying a new variation on the “even-numbered Star Trek movie maxim” (every other film in that series was seen to be a corker). Godzilla vs Kong is about as intellectually enriching as you would expect a film called Godzilla vs Kong to be. The dialogue will cause nobody from the Noël Coward estate to telephone m’learned friends. But it is at home with its own sense of fun and precise in the organisation of its cacophonous digital action. Oh, to see its urbanicide played out on a screen bigger than Kong’s thumbnail.

Both the giant gorilla and the enormous lizard have, throughout decades of existence and occasional rivalry, always meant well. They don’t mean to kill blameless aviators or gouge out the centre of Tokyo. They are just clumsy that way. Once together, they come across like ill-matched parents creating hell for the children as they battle towards an apocalyptic divorce.

This time round the metaphorical kids include Rebecca Hall and Alexander Skarsgård as, respectively, professor of bollocksology and distinguished expert on the dynamics of baloney. Demián Bichir communicates his evil squillionaire status by wearing an overcoat over his shoulders in the style of Melania Trump, or Don Fanucci in The Godfather Part II. Millie Bobby Brown and Julian Dennison play the class of actual kids that villains in Scooby-Doo once dubbed “pesky”.

That overqualified cast works hard with the mindless plot, but the stars of the piece remain the venerable beasts themselves. Adam Wingard, director of the fine horrors You’re Next and The Guest, escalates the invention as we move towards a showdown among the doomed skyscrapers of Hong Kong. A visit to the centre of Earth kicks up some Jules Verne action (I’m not sure the gravitational arrangements make sense, but never mind). Thousands of unseen citizens sacrifice themselves for our enjoyment.

Oh well. Better that than an endless stream of homogeneous tedium.