Ghosthunters review: Boo – and not in a spooky, good way 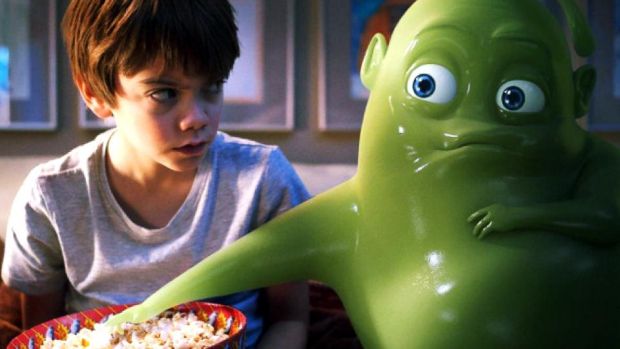 If there’s something weird in your neighbourhood, who you gonna call? Hmm. Might you have the number of a good copyright lawyer? Because the green flubbery friendly spook in Ghosthunters looks awfully like a yellow-pack Slimer.

That, alas, is the least of this movie’s problems. There are – and we believe this is the correct collective noun in the circumstances – a whole mess of production houses and funding agencies and nationalities attached to this unlovely Irish-Austrian-German coproduction.

This might account for the film’s dreadful Euro-pudding aftertaste: here is a film where every line of dialogue seems to have been recorded in post and drafted on with scant regard for synchronisation. It is not unlike watching every bad commercial for Kinder Chocolate and Cillit Bang on a loop.

Based on Ghosthunters and the Incredibly Revolting Ghost! Cornelia Funke’s bestselling novel, Ghosthunters promises a hitherto unseen supernatural world wherein the titular profession does battle against various spectres, in this instance, a monstrous Ancient Ice Ghost (AIG) who may or may not plunge our world into a second ice age.

In common with books chronicling the adventures of a certain spectacled boy wizard, Ghosthunters boasts its own technical jargon (ASG is a synonym for Averagely Spooky Ghost) and team effort, as a triumvirate comprising scaredy-cat kid Tom, Slimer- clone Hugo and discredited Ghosthunter Hetty Cuminseed take on the aforementioned AIG.

Unhappily, the results are over-extended, the characters are rather less than wafer thin, the plot is preposterous and there’s not a trace of heart about the entire sorry enterprise. Children’s films – often regardless of quality – tend to scare up boffo box-office returns in this particular territory.

Maybe there are kids who’ll take to Ghosthunters, although presumably they’re the same kids who enjoy shoving crayons up their own noses. Boo. And not in a spooky, good way.