Freeheld review: an elaborate game of hide and weep 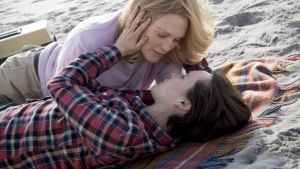 Laurel Hester (Moore), is a decorated New Jersey police officer with the newspaper cuttings to prove it when she meets the exciting and utterly smitten young garage mechanic Stacie Andree (Page) at a volleyball game.

Although Hester’s colleagues, including her partner Dane Wells (Shannon), knew she was a lesbian, Hester is initially guarded about her new relationship. It requires a considerable amount of figurative swooning for the couple to finally get over the hump, acquire a puppy and move in together as registered domestic partners. Tragedy strikes in 2005, when the chain-smoking Hester (after a whole lot of shotgun-over- the-mantel toking and dragging) is diagnosed with terminal and aggressively spreading lung cancer.

The cops have no problem in extending spousal pension rights to the same-sex couple, but the county board says differently.

Ron Nyswaner (Philadelphia) wrote this feature-length adaptation of Cynthia Wade’s 2007 Oscar-winning short film Freeheld but has expressed reservations about director Peter Sollett’s final cut. We may not know exactly how Nyswaner envisaged Hester and Andree’s historic struggle, but there’s nothing to match the women’s bravery efforts in this careful drama.

To be fair, Freeheld can’t be accused, as Roland Emmerich’s Stonewall has, of being a complete straight-wash. The film may tiptoe around both cancer and homosexuality, but that arguably does mirror Hester and Andree’s own desire for discretion.

The real-life antecedents do more to merit the weepie denouement than the film itself: yet weep you shall, nonetheless.