Fassbender and Gleeson face off as a Traveller family at war

Director Adam Smith’s debut Trespass Against Us plays baby Tarantino games to enjoyable effect, but where is the damn plot?

Michael Fassbender and Brendan Gleeson star as father and son in upcoming movie 'Trespass Against US'. Video: A24 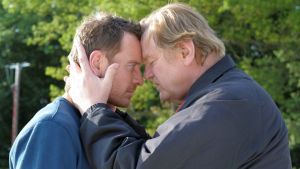 Loggerheads: Michael Fassbender and Brendan Gleeson in Trespass Against Us

Film Title: Trespass Against Us

Here is an enormously frustrating film that, thanks to smart casting and well-drawn characters, abounds in rich, gamey flavour and rough, palpable texture.

Unfortunately, debut director Adam Smith has found no plot to drape over his creation. We end up with something fascinating, but half formed.

Michael Fassbender is the frustrated son of overpowering father Brendan Gleeson (you’re already on board, right?). We are in the English West Country among a traveller family that may be of Irish descent. The accents are pure Gloucestershire and the emotional connection to the English countryside suggests something of Rooster Byron in Jez Butterworth’s play Jerusalem.

Gleeson’s Colby is a magnificent wise fool. Resistant of supposed indoctrination, he urges his grandchildren to ignore their teachers when they talk about such nonsense as evolution. It seems as if Fassbender’s Chad is a victim of his dad’s reactionary philosophy. He cannot read, but he has hopes of moving his wife and child away from the suffocating criminal fraternity.

This is an old story. There are hints of The Godfather in here. Fassbender and Gleeson ram against one another with compelling enthusiasm. Chad’s rivalry with local cop Rory Kinnear is played first for comic and then for more sinister effect.

If only there was something for the characters to do beyond playing baby Tarantino games. Smith has great fun shooting Fassbender in fiercely unnerving car chases. At one stage, they zip through the city in a hatchback, every surface of which has been painted yellow bar an eye-slit on the front windshield. It’s a thrilling sequence that is let down by the lack of any satisfactory destination.

Such set pieces punctuate the film. Little tragedies retain our interest. An excellent supporting cast that includes Barry Keoghan and Killian Scott decorate the corners. You feel that you could step into the screen and live among these characters. But one fears there wouldn’t be much to do when you got there.