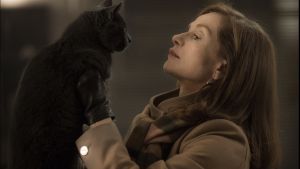 It would be wrong to suggest Michèle LeBlanc, played by Isabelle Huppert, is unaffected by the attack.

Nobody associated with this shocking melange of high-end soap and Hitchcockian provocation seems to have read the etiquette book. This is just not how we expect sexual violence to be treated in contemporary cinema. Oh, let’s not be naive.

The perennially iconoclastic Paul Verhoeven – here working from a novel by Philippe Djian – is surely undermining those polite conventions on purpose. Think I can’t do this? I’ve just done it. What do you think of that?

The uneasy tone is established when, after suffering a vicious rape, the imperious Michèle LeBlanc (Isabelle Huppert) settles painfully into a warm bath. A small heart of blood gathers in the suds above her crotch. Exhibiting the proud exasperation she directs at everything else – crass mother, useless son, inconveniently parked cars, insufficiently ruthless colleagues – Michèle brushes the stain casually away and continues with her prosperous life.

The first potential outrage is that Michèle does not seem as broken by the experience as cinema usually demands. Verhoeven opens the film with a sexual assault that admits savage violence without lingering inappropriately. A masked man bursts through the French window and pummels her into submission. As a child, Michèle became an unwilling celebrity when her father was arrested for a series of motiveless murders. A lingering desire to stay out of the news half-explains why she refuses to go to the police. Her ability to speak lightly of the assault sits more awkwardly in this corner of the movie universe.

It would be wrong to suggest Michèle is unaffected. She fantasises about hammering her assailant to death with an ashtray. Later on, having sex with an illicit lover, she lies comatose as if in anticipation of the grave. But her matter-of-factness when discussing the attack is genuinely jarring. “I guess I was raped,” she tells her friends. Elsewhere, she addresses her predictably unhelpful cat. “You didn’t have to claw his eyes out,” she sighs. “But scratch him at least.”

There has, however, been less controversy around Elle than might have been expected. (At Cannes, one approving female critic described it as “the most surprisingly un-booed title” of the event.) This can surely be put down to Isabelle Huppert’s conspicuous authorship of the central role. Verhoeven permitted her great freedom and she has responded by delivering one of the great cinematic essays in protracted disdain.

It’s impossible to imagine an actor from any other country injecting such meaning into this spectrum of damp exhalations, nasal snorts and guttural grunts. She sighs at her son for allowing his awful, unfaithful girlfriend to boss him around. She swells with ridicule at her mother’s association with younger lovers.

“Your stud forgot his hernia belt,” she says, dangling an unlovely garment between finger and thumb. (The subtitles might have better read “truss”, but never mind.) That disapproval is also implicitly directed at anybody who dares tell her how she “should” respond to a rape. Feel the lash of that rebuttal.

Though a formidable creation, Michèle is no feminist paragon. As the director of a video game company, she urges the designers to increase the “orgiastic convulsions” imposed on assaulted female characters. She is, perhaps, part of the problem.

None of that is, however, so troubling as the decisions Michèle makes in the closing act. By that stage, despite the heroine learning to shoot and her buying high-end mace, the film has resolved itself into something other than a rape-revenge thriller. A late turn knocks the viewer back as if he or she had just blasted water into the bowl of a spoon while doing the washing up. It will be a transgression too far for many. That is a proper reaction. Others will enjoy the wilful trashing of established mores. Neither response is entirely right. Neither is entirely wrong.

Elle is a beautifully made diversion that revels in lush cinematography from Stéphane Fontaine and insistent stalking chords by composer Anne Dudley. Every performance is striking. The script throbs with astringent wit. But it is not a film that expects unconditional love.