Dumb and Dumber To: the Farrellys return to their gross-out grassroots

Jim Carrey and Jeff Daniels are back as cinema’s most lovable idiots. But why a sequel 20 years later? ‘It makes sense because these guys are always the same. They’re too stupid to have character arcs’ 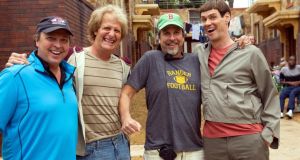 It would be nice to write a poem that made a pale young person cry. Imagine painting a picture that altered viewers’ attitude to the human condition. Still, none of this can, surely, compare with sending your audiences into actual paroxysms.

“That is the thing maybe that I am most proud of,” Peter Farrelly says. “Because I remember when people saw it for the first time. They were literally going into the aisles and clutching their sides. To do that is amazing. That’s rare. It’s hard to shock people in such a happy way.”

Farrelly is, you may have guessed, talking about the hair gel scene in There’s Something About Mary. If it’s possible to put a visual gag on to a monument, then – disrespectful thought it may be – an image of Cameron Diaz with male emission in her fringe may make it on to Farrelly’s sarcophagus.

“They said: ‘It can’t work. It can’t work.’ And we kept saying it could. But I was worried. Was this the point I was going to lose them? Would women be turned off by it? Would men? I was very nervous.”

As things worked out, that scene marked the point at which Bobby and Peter Farrelly secured their position as the new gods of pre-millennial mainstream comedy. It was 1998.

Four years earlier they had had an enormous smash with Dumb and Dumber. Kingpin followed in 1996. Coming after the white-bread comedy of John Hughes and the coyness of political correctness, the Farrellys’ blend of extreme slapstick and scatological gross-out seemed paradoxically refreshing.

“I really don’t like the phrase ‘gross out’,” Farrelly says. “It strikes me as very reductive. But comedy had got very soft in the 1980s. We were selling birds to blind kids in Dumb and Dumber. People said you can’t do that. But I knew people wanted something like that.”

Hockey puck’d Both brothers were supposed to join me to discuss Dumb and Dumber To, their delightfully titled sequel to that smash debut, but Bobby, now 56, has just injured himself playing ice hockey.

“Oh God. He plays with these 20 year olds and they’re really good,” his older brother laughs. “He keeps thinking he can go on forever. But he can’t.”

The past decade has not been so fruitful for Peter and Bobby. Films such as The Heartbreak Kid, Hall Pass and The Three Stooges conspicuously failed to score with critics or audiences. But Dumb and Dumber To is a hit with kids who weren’t even born when the original came out.

Jeff Daniels and Jim Carrey are back as Harry and Lloyd, among the simplest simpletons in popular culture. Two decades after their first road trip, the morons are setting out to track down Harry’s estranged daughter.

So, why is this happening now? A lot of history has passed since the cuddly dog car last journeyed out.

“The stars just lined up,” Farrelly says. “We didn’t deliberately wait 20 years, but that did allow us to tell this story. It’s funny. After Mary, the studio said: ‘Make a sequel to that.’ But that made no sense. It’s a complete story. A sequel to Dumb and Dumber makes sense because these guys are always the same. They’re too stupid to have character arcs. But it just didn’t happen.”

So in what sense did these stars eventually form alignment?

“Jim was sitting in a hotel and Dumb and Dumber came on. He began laughing and phoned me up to say, ‘We have to do this’.”

I note that the unimpressive 2003 prequel, Dumb and Dumberer, seems to have been airbrushed out of history. It is the Leon Trotsky of Dumb and Dumber lore.

“Oh, I was totally opposed to that,” Farrelly says. “We don’t own the rights. The studio owns the rights. First of all, how can you make it without Jeff and Jim? Second point: all teenagers are dumb. They’re children in adults’ bodies. It makes no sense.”

had wanted to be a doctor since he was seven and, having achieved that aim, couldn’t understand why Peter seemed so uncertain in his ambitions.

But the lad eventually realised he had a gift for storytelling. He studied at Columbia University and slowly gathered a reputation as a writer for hire. But both siblings were unknown when Dumb and Dumber got made. How did they get newly hot Jim Carrey on board?

“We have since talked to people like Martin Short and Steve Martin who’ve asked why we never offered them a part,” Farrelly says. “We told them we did offer them Dumb and Dumber. But they never got to read it. Some agents looked at the title and said ‘I’m not showing that to my client’. Ha ha. But it did get to Jim, and he really wanted to do it.”

So, 20 years later, do Bobby and his brother feel that they managed to invent a new school of comedy? Their names are used (not always kindly) as an adjective to describe a certain class of anarchic broadness.

“I wouldn’t say we reinvented the wheel,” he says. “But we did surprise people. That’s the key to comedy, I think. If you can no longer surprise them, there’s no point doing it.”

nDumb and Dumber To opens next week