DannyBoy: Gits of a certain vintage will enjoy this Irish film set in 1981 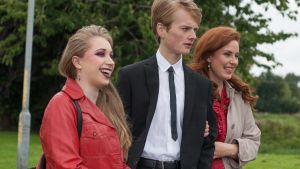 We have got used to much strangeness over the past two months. More peculiar things have come our way than the Facebook release (look for “DannyBoy the feature film”) of a new film from Ferdia Mac Anna. Still, the movie’s social-media appearance on May 1st does mark another shift in the culture.

With the best will in the world, the low-budget production is a flimsy affair. Adapted from Mac Anna’s novel The Ship Inspector, DannyBoy follows the ups and downs of the eponymous protagonist in a shakily rendered version of 1981. Played with some charm by Darragh Byrne, Danny struggles with eccentric parents, a brother who fancies himself a rock star and a nervous psyche that causes him to stammer when confronted with a likely girlfriend.

Fair City alumna Clelia Murphy has the best of it as the Ma who, after her husband goes missing, embarks on a career as a Fianna Fáil candidate. Corrected in her denunciation of a rival as English, she quips: “You’re Fine Gael. It’s the same thing.”

Elsewhere, the spirited cast get buffeted by a wild flurry of competing comic inventions. Some need another fortnight of refining: the sequence that has candidate Mum accidentally relaying an intimate conversation through a car-mounted megaphone ceases to make sense after the first syllable.

A meltdown over dinner moves too rapidly from niggling tension to apocalyptic rancour. Was, as Danny’s sister suggests, “Carla” still a peculiar name in 1981? So underpopulated is the action that the “nice girl who’s right under your nose” has, at first, little else to do but get under Danny’s nose.

We shouldn’t be too harsh. Shot with the eager assistance of locals in Kildare, DannyBoy has an ingenuous charm that almost makes up for its pinballing plot. There is throughout a feeling of being swept along by a community endeavour.

Gits of a certain vintage will enjoy identifying the copious tunes from contemporaneous Irish acts. Mac Anna, formerly of Rocky De Valera and the Gravediggers, was right not to resist inclusion of his band’s immortal John Wayne. Keep ears open for Treasure on the Wasteland by The Atrix and Soldier Boys by Pop Mecanics [sic]. I saw that last band supporting Roxy Music in 1982, you know?