Daniel Radcliffe: ‘I don’t run around shouting about being Irish’

‘Find me a Beckettian absurdist comedy where one guy’s dead!’ That is not how the Harry Potter vet landed the part of a partially animated corpse in a bizarre bromance called ‘Swiss Army Man’ 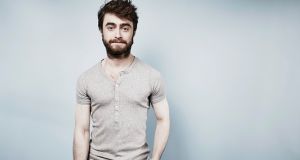 “I’m definitely over any embarrassment I might have had about farting in front of people.” 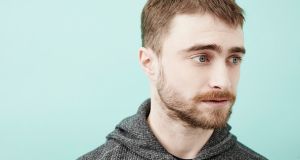 Daniel Jacob Radcliffe was born in London in 1989, the only child of Irish literary agent Alan George Radcliffe and South African casting director Marcia Jeannine Gresham. He still has family in Co Down and considers himself Jewish and Irish.

It seems most unlikely that we’ll see a stranger bromance this year than Swiss Army Man. Bear with us: when a flatulent corpse (played by Daniel Radcliffe) washes up on a beach, Hank, a suicidal castaway (Paul Dano) drags it back into the woods for company and, occasionally (brace for all kinds of oddness), transport. The more Hank bonds with his dead companion, the more Manny – as he calls himself – can move and talk and respond. Finally, using only Manny’s gentlemanly regions, the pair journey toward Hank’s lost love.

It’s a lot of work for the two actors. And, today, I’m struggling to find a way to compliment Radcliffe on his performance without saying something untoward, ie: “Flatulent corpse! It’s the role you were born to play!”

“I can appreciate the difficulty of your situation,” he laughs. “But don’t worry. I’ve heard all the jokes. And I’m definitely over any embarrassment I might have had about farting in front of people.”

Swiss Army Man marks the feature film debut for music video directors Dan Kwan and Daniel Scheinert (best known for DJ Snake and Lil Jon’s chaotic Turn Down for What). The duo who work under the name “Daniels”. Did Radcliffe and the film-makers come up with a new collective noun?

“You’d think we would have,” says Radcliffe. “We just reverted to surnames in the end: Radcliffe, Kwan and Scheinert. But once we started doing that every time we heard Dano – Paul’s surname – we all looked around. And there were other Daniels on set for added confusion. And then I went off to make the film Imperium with another Daniel. So it has been a weird Daniel-heavy year.”

I mention a recent survey concerning the one in five mothers who feel “namer’s remorse”, a poll wherein, sadly, Daniel placed among the most regrettable names.

Radcliffe is rightly baffled: “What? I’ve always been really happy with my name. I’m fine with Dan too. Danny is the one I can’t be doing with. I met a Danny recently. And he is a lifelong Danny who has always been happy with it. But it doesn’t fit me at all. I don’t know why.

“It always makes me think of Danny, the Champion of the World. And Danny Boy. Every time I hear the name, Danny Boy plays in my head. And while I’m happy to have that played at my funeral, I don’t want to hear it all the time.”

Radcliffe’s post- Potter career trajectory makes for a pleasingly screwy shape. With an estimated personal worth of £74 million, he certainly didn’t need to do a year-long stint on Broadway, a trans-Atlantic turn in Martin McDonagh’s The Cripple of Inishmaan, or contribute questions to an episode of Only Connect.

But he’s kept on working. There have been turns in the 2012 TV adaptation of Mikhail Bulgakov’s A Young Doctor’s Handbook, as Allen Ginsberg in the movie Kill Your Darlings, as Igor in Victor Frankenstein, and as the spooked lead in The Woman in Black. Blink and you’ll miss him as a dog walker in Trainwreck and the voice of Thomas the Tank Engine in Robot Chicken.

He must have some very interesting conversations with his agents and reps.

“I know,” Radcliffe nods. “But what could I have said to get something like Swiss Army Man? ‘I want you to find a Beckettian absurdist comedy where one guy’s dead?’

“I’m lucky because my English agent has known me and worked with me since I was 10. She’s one of my dad’s best friends and she has a very good sense of what I like and what I don’t. The medium doesn’t matter to me as long as the work is interesting. I don’t really care if it’s TV or a play or an indie movie. I just want to find projects that allow me to do something that I haven’t done before.”

Radcliffe describes his sensibility as “a bit eccentric or magic realist” and was, accordingly, delighted to play himself in the deliciously dark animated show Bojack Horseman.

“The best writing about fame and depression I know,” he gushes. “It’s so sad. I also love Rick and Morty. I find it really hard to get the time to watch TV shows. The only entire series I’ve got through in recent years are Fargo and Stranger Things. But I can always find time for half an hour of animation. Especially those shows. They’re very cool.”

Daniel Jacob Radcliffe was born in London in 1989, the only child of Irish literary agent Alan George Radcliffe and South African casting director Marcia Jeannine Gresham. He still has family in Co Down and considers himself Jewish and Irish.

“Just for the record, I’m not one of those awful people who runs around shouting about being Irish on St Paddy’s Day. I’m certainly not religious. But I’ve always had an awareness and pride about those two cultures and histories. And I always felt a little bit different from most people around me.”

He first expressed an interest in acting at the age of five. By 10 he made his screen debut as the young hero in a BBC adaptation of David Copperfield.

“I remember my first time on set very well,” he says. “We were in Liverpool and it was four days before my 10th birthday. I remember filming a scene in a workhouse or orphanage. I was surrounded by all these new people. I was fascinated by the props guys and these gas lighters they had. I think I spent time trying to steal those.”

In 2000, after some eight months of auditions, he was selected by director Chris Columbus and author JK Rowling to play Harry Potter in eight movies. What does he think about the older Harry Potter (played by Jamie Parker) in the West End hit Harry Potter and the Cursed Child?

“It’s nice to see the part in someone else’s hands, especially such a good actor,” he says. “I feel like I’m passing the baton, but I don’t think that the baton will ever fully leave my hand. I’ll always have to talk about it and answer questions. I don’t feel possessive over it. It’s nice to share it.

“And I’m also waiting for people to start asking Eddie Redmayne the same kind of questions about Fantastic Beasts that they used to ask me. They’ll probably still ask me. But, finally, I really won’t have any information.”

There are worse things, he notes.

“A lot of child actors grow up to be working actors with no issues. But obviously headlines focus on the worst stuff, the scandalous stuff. I’m lucky because I love acting. I love being on a set, I love what I do. Some day I hope to be an old actor on a set. And I know I’ll still be happy. If you’re in it for the fame, you won’t be happy for long, because it doesn’t last.

“The main problem for a lot of child stars is not really the drink or drugs. Those things can happen to anybody. The main problem is building an identity that is not linked to being famous. It’s dangerous to grow up constantly exposed to the perception that everyone else has of you.”

And yet, somehow, against all odds, one of the most recognisable young actors on the planet has turned out to be a sound- as-a-pound human being, who takes care to thank me for my time and interest. As if, by showing up, I’ve done him a favour.

How has Radcliffe emerged so unscathed? He must have figured out a means of divining who to trust – both personally and professionally – awfully fast.

Thomas Merton: the hermit who never was, his young lover and mysterious death
4

Dylan Moran: ‘Smoking or breathing, one of them had to go’
9