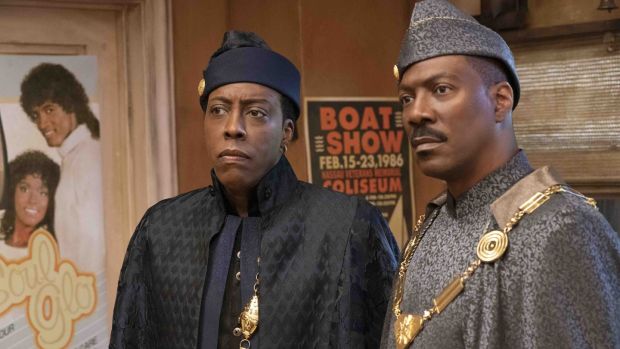 The Blues Brothers 2000? Live Free or Die Hard? Stop me if you’ve heard this before. Long- awaited sequels are rocks on which to founder. Mostly they go through the motions, regurgitating catchphrases, playing greatest hits, and sleepily Anchormaning their way through a rehashed plot.

Here’s the rub. According to an increasingly popular historical theory, once the preserve of vaporwave enthusiasts, culture ended in the 1990s, somewhere around the time movie stars like Arnie and Sly were supplanted by serious young professionals like Saoirse and Timothée.

Coming 2 America understands its relationship with nostalgia and by golly, it wrings every last warm feeling for the end of cultural history. James Earl Jones is back! And he’s got company. En Vogue! Salt-N-Pepa! Gladys Knight! In addition to a returning original cast – minus Eriq La Salle, alas – there’s Morgan Freeman playing himself and all the prosthetic characters once essayed by Murphy and Arsenio Hall. Where have you been, Arsenio Hall?

The plot is a silly rerun. Murphy’s Prince Akeem Joffer returns to Queens to fetch a hitherto unknown son back to the kingdom of Zamunda, where Akeem’s three very capable daughters are deemed ineligible to take over the throne. Thus, his unemployed offspring Lavelle (Jermaine Fowler), Lavelle’s mother (Leslie Jones, marvellous) and Lavelle’s uncle (Tracy Morgan, also marvellous) decamp to Africa, where Zamunda is menaced by rival neighbouring kingdom Nextlandia, ruled, hilariously, by Wesley Snipes. Inevitably, Lavelle, like his father before him, falls for a commoner.

There are African stars, including South Africa’s Nomzamo Mbatha and Nigerian celebrity Rotimi, making auspicious Hollywood debuts. The $60 million budget is well spent on Ruth E Carter’s lavish costumes and Fatima Robinson’s choreography. The material might be flimsy but there are huge set-pieces and stand-offs with convincing CG lions.

That’s only appropriate in a movie featuring Eddie Murphy, one of the last true movie stars before the end of history.

Nora and Lucia Joyce: what sort of mother abandons her daughter?