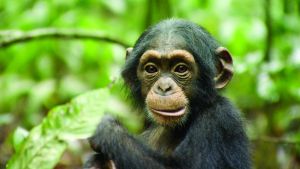 We love the idea of Disneynature. The House of Mouse may own and manage everything from Pixar to Marvel Comics. But while there’s a boutique studio on the books, an imprint with the express purpose of continuing Uncle Walt’s passion for wildlife, then Disney, one feels, is still Disney.

There’s no room in contemporary theatres for anything like True-Life Adventures , the series of short nature reels produced by Disney between 1948 and 1960. However, there is, one trusts, a market for beautifully shot, smartly narrated, feature-length documentaries such as Disneynature’s 2010 flamingo epic, Crimson Wing .

To date, alas, two of Disneynature’s theatrical releases have been fix-ups– that is, chopped-up, hacked-down versions of Jacques Perrin’s Oceans and David Attenborough’s Earth . Chimpanzee , on paper at least, ought to be an improvement on these bastardised, bowdlerised cuts of TV series and extant motion pictures.

Produced in association with primatologist Jane Goodall and shot over four years, Chimpanzee was created with the multiplex and movie-going punter in mind. The runes are looking good: the documentarians’ have faced uncommon difficulties getting up close and personal with their subjects in Côte d’Ivoire’s Taï National Park during the wet season.

Their patience pays off: over the course of the shoot an orphaned infant chimp is “adopted” by a lone alpha male. This bond – a genuine scoop – is handsomely and cinematically framed with tangled jungle vines and vast waterfalls.

So why is Chimpanzee so unexpectedly useless?

Viewers in this part of the world, visual consumers raised on and spoiled by the work of Mr Attenborough, will immediately be dismayed by the appalling idiocy of the narration. Speaking in sound-bites that make March of the Penguins seem like the Shoah, Tim Allen’s voiceover just won’t quit with base anthropomorphising. The banal chatter about chimp diners and monkey mom love is bad enough; the “wacky” intonation is downright intolerable.

We could excuse the scenes of bloodless bloodlust and sanitised animal behaviours (this is a family film, after all) if there was enough material to justify a feature film. There isn’t. Instead we’re subjected to the same pointless observations in the same “He thinks he’s people!” tone over and over.

Chimpanzees share 96 per cent of our DNA and a common Pan Prior ancestry. We’ll bet they’re embarrassed to admit as much when they see this.