James McAvoy, the Scottish star of Danny Boyle’s new film Trance, reveals why he prefers fish and chips and nights in to glitzy premieres 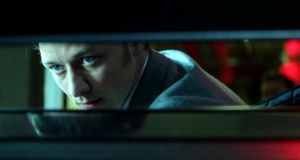 James McAvoy holds out his left hand and apologises. “I’m really sorry. The other one is a bit busted.” He twists himself around for a lopsided shake.

Oh boy. He’s not kidding. There’s blood under his fingernails and his cuticles are positively encrusted. “It’s fake,” he assures me. “In case you’re looking I don’t have dirty fingernails. Really. But unless I soak them in Epsom salts for about an hour I can’t get rid of it.”

Out damned spot. It’s only right and proper that the blood won’t shift. The 33-year-old is, after all, currently playing Macbeth in director Jamie Lloyd’s wow-making, post-Mad Max production of Shakespeare’s goriest play. This morning, we meet not too far away from the theatre space at Trafalgar Studios. We can’t be too far away. The sold out production will run until next month. Until then, the actor won’t even get enough time off to watch Trance - a new film starring – well – James McAvoy.

“I still haven’t seen it and I even went to the premiere last night,” he grins. “I walked down the red carpet and straight through the cinema – so I saw about four minutes of it because they were testing the print – then I went through the fire escape and I sprinted all the way to back to the theatre.”

So he doesn’t get out to multiplex too often then?

“I’ve seen about five films in the last few years,” he says. “Okay, that might be a bit of an exaggeration but not much. I got struck off the BAFTA list because I kept forgetting to vote. I was just so caught up with domestic life I forgot to watch the films.”

Trance, the latest urban thriller from director Danny Boyle, sees McAvoy’s cheeky everyman attempting to recover his memories in the aftermath of a major art heist. Pay close attention: neither our hero nor Rosario Dawson ’s hypnotherapist is precisely what they seem to be and the plotting is even more devious. Can they recover Goya’s Witches in the Air before Vincent Cassel ’s thug does? And do we really want them to?

“I liked the script a lot,” says McAvoy. “And I liked the character a lot. I liked his weirdness. And then I sat down with Danny and auditioned for him and he gave me wee notes. And will everything he said I thought: ‘Och, he’s good. He’s really good’. He’s a very clever director. In this business everybody wants to know the answer. They want two plus two equals financial success or awards or whatever. But Danny doesn’t worry about finding the answers. He wants to find new questions.”

McAvoy has been a Danny Boyle fan since the director’s early Scottish films: “I remember watching Trainspotting and I was blown away,” he says. “I was fairly innocent growing up and absolutely clueless about drug lore so I never seen anything like it. Not only that but I was sort of ignorant of the fact that a film like this could happen. It’s amazing that film came out of Scotland at that time. What Irvine Welsh does is amazing. He has such a unique voice. I’d think so if he was from Toronto or Dubai. And how Danny brought it to the screen. It’s unbelievable.”

McAvoy was raised in Drumchapel – one of Glasgow’s less salubrious boroughs - by his maternal grandparents and his mother, a psychiatric nurse. A well-behaved youngster, he was never in trouble and kept his head down at school. At 17, he was trying to decide between life in the Navy or reading English and Politics at university when a chance meeting with director David Hayman pointed young James toward the Royal Scottish Academy of Music and Drama.

He felt out of place at first, a sensation, he says, that continued on into his early TV appearances in State of Play and Band of Brothers.

“I had always felt like I was about to get found out,” recalls McAvoy. “I was sure somebody was going to come up and say ‘Whoa, whoa, whoa – How did you get in here?’ It took a couple of years before I thought of myself as an actor.”

Did that realisation change how he did things, I wonder?

“Yeah. I stopped panicking. I stopped trying to be good and started to get on with telling a story. I started to look around and starting thinking ‘I have much right to be here as the fucking next dude’. It wasn’t just some fluke that I was there. There’s luck involved when anybody is successful in this business. Not just me. And then I started to work harder instead of just trying to survive until the next thing.”

McAvoy soon struck out with acclaimed turns in The Last King of Scotland, The Last Station and Atonement, though the actor has proved equally adept as a Hollywood player in Wanted, The Chronicles of Narnia: The Lion, the Witch and the Wardrobe and X-Men: First Class.

Still, you couldn’t say that Tinseltown has gone to his head. Rather, McAvoy lives quietly with Anne-Marie Duff, his one time Shameless co-star and wife of seven years. The couple have never released pictures of their young son Brendan to the press and famously prefer nights in with Sudoku puzzles to glitzy premieres.

“I don’t mind doing press and that for my own films,” he says. “What’s the point in telling a story if you don’t try and find an audience for it? But I’d never do a red carpet otherwise. Partly it’s tactical but partly I think ‘Why would anyone want to see me?’ They don’t unless I’m in something. And these events are not that much fun. If I’m going on a night out I’d rather go to the pub with my pals.”

You wonder how such simple living fits alongside his more high profile collaborators. Like Robert Redford, who directed McAvoy in The Conspirator. Or Angelina Jolie, his gun-toting love interest in Wanted.

“I don’t know that the red carpet is any more fun for those people,” he says. “I know they’re both international stars but they’re also actors. They’re great actors. And that’s what I like about them and that’s how I connect with them. And those two - in particular - are both really, really nice people even though they have crazy lives and a crazy amount of attention to deal with.”

Despite being half of the planet’s most glamorous Celtic couple – Anne-Marie’s parents are both Irish – McAvoy doesn’t trade in cutesy marital anecdotes. He will say that it’s handy having “someone in the same job” at home: “But it doesn’t make any difference to our relationship.”

“I got to spend about three months in Galway when she was doing Playboy of the Western World with Druid,” he grins. “I love it there. Mcdonaghs is my favourite fish and chips ever.”

But you probably won’t, since it’s on Netflix and these days the audience is captive 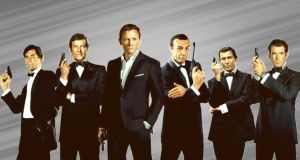 ‘You can’t but conclude, the least safe place for any of us this weather is in our homes’
Real news has value SUBSCRIBE