Farhadi has firmly established himself as a kinder Ingmar Bergman 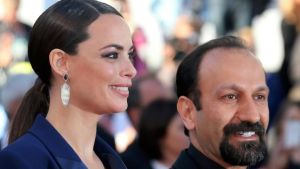 Director Asghar Farhadi (R) and cast member Berenice Bejo pose on the red carpet as they arrive for the screening of the film ‘Le Passe’ (The Past) in competition during the 66th Cannes Film Festival. Photograph: Jean-Paul Pelissier/Reuters

Film Title: The Past

Asghar Farhadi’s follow-up to the richly praised A Separation begins with a French woman picking up her estranged Iranian husband from a busy airport. Before he makes it to the concourse, they exchange a few words through a plane of glass. Despite being unable to hear one other, they still manage to communicate effectively. It’s a brilliant beginning to a superbly nuanced picture. We immediately understand there is still a connection between the two, but, as the picture progresses, we learn that, when speaking face to face, they often find it hard to make themselves understood. That is the nature of relationships.

This gorgeously shot, impeccably acted picture feels very much like a companion piece to its predecessor. As in A Separation, the action concerns the messy dissolution of a marriage and the painful disentangling of a mystery. Ahmad (Ali Mosaffa) rejoins Marie (Bérénice Bejo from The Artist) in a town outside Paris to finalise the details of their divorce. Complications abound: her new lover’s wife is in a coma; his son is still traumatised; Marie’s daughter from an earlier relationship seems unreasonably upset by the situation.

Some viewers may find the film just a little too close in theme and structure to A Separation. But the seriousness of its purpose and the quality of its craft cannot be questioned. Comparisons are invidious. But, as an analyst of poisoned relationships, Farhadi has firmly established himself as a kinder Ingmar Bergman. First-class stuff.