Cannes 2017 line-up the most promising in a decade

Irish film ‘The Killing of a Sacred Deer’, starring Nicole Kidman and Colin Farrell, is one of the favourites for the Palme d’Or 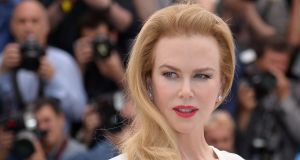 Nicole Kidman, who will top the bill at the festival this month as the world’s flagship movie showcase celebrates its 70th anniversary. Photograph: Alberto Pizzoli/AFP/Getty Images

Last month, when the programme for the 70th Cannes Film Festival was unveiled, many reports led with the news that this was the first time Netflix productions would compete for the Palme d’Or. Here was a bright new dawn. The streaming service was now part of the world cinema family. A few weeks later, the headline news is that this may be the last time Netflix productions will compete for the Palme d’Or.

Here is the short version. Netflix refused to guarantee that its two entrants – Bong Joon-ho’s Okja and Noah Baumbach’s The Meyerowitz Stories – would receive a theatrical release in France.

Following rumours that the films were about to be ejected, Cannes issued a press release saying that, although the Bong and the Baumbach would remain, from next year “any film that wishes to compete in competition at Cannes will have to commit itself to being distributed in French movie theatres”. Unlike its rival Amazon Prime, Netflix has shown little enthusiasm for theatrical exhibition. So the love affair may be over as soon as it has begun.

At any rate, this is still the first time Netflix has competed, and the company has delivered two hugely enticing productions. Noah Baumbach follows up Frances Ha and While We’re Young with another cerebral comedy. The Meyerowitz Stories groans with such stars as Emma Thompson, Ben Stiller, Candice Bergen and – making an unlikely second appearance in the competition, trivia fans – Adam Sandler. Our own Robbie Ryan is behind the camera.

Bong Joon-ho’s Okja stars Tilda Swinton and Lily Collins in a monster movie with an ecological bent. Following gems such as Mother, Snowpiercer and The Host, the Korean director is now among the world’s most admired film-makers.

On balance, Thierry Frémaux, the festival director, will be very happy with the films he has lined up for the 70th competition. Lucky attendees will also get to see new work by Todd Haynes, Michael Haneke, Sofia Coppola, Lynne Ramsay and François Ozon.

Element Pictures, the Dublin-based operation that had success with such films as Lenny Abrahamson’s Room and Yorgos Lanthimos’s The Lobster, returns to the competition with Lanthimos’s The Killing of a Sacred Deer. Made with the support of the Irish Film Board, that film propels Colin Farrell, Nicole Kidman and Barry Keoghan into further psychological upheavals.

The ante-post favourite for the Palme d’Or does, however, looks like Michael Haneke’s Happy End. Set in and around Calais as the refugee crisis grows, the film is certainly not short of political relevancy. Were Haneke to win he would become the first director to triumph three times (and for three successive films at that). There are few film-makers Cannes would rather see break the record.

The film critic Neil Young, whose annual Cannes odds are more reliable than those of any bookmaker, has Happy End as short as 3/1 in a tasty 19-horse race. The Killing of a Sacred Deer is second favourite at 6/1. Were Sacred Deer to win, it would be the first Irish film to do so since The Wind that Shakes the Barley in 2006.

Young rates Ruben Östlund’s The Square as third favourite at 13/2. Östlund has never competed for the Palme d’Or before, but his drama Force Majeure was a big hit in the festival’s Un Certain Regard strand three years ago. The Square stars Elisabeth Moss and Dominic West in a satire of the contemporary art scene. It sounds delicious.

Sofia Coppola’s The Beguiled is, however, is likely to attract more mainstream attention. Her remake of Don Siegel’s film, a gothic western set in a girls’ school during the American Civil War, brings Kidman and Farrell together for a second time in the competition. Elle Fanning and Kirsten Dunst flesh out a tantalising production. If The Beguiled comes off, it will surely be in consideration when awards season cranks into action.

Todd Haynes’ intriguing Wonderstruck is also likely to be an Oscar contender. Returning two years after his triumph with Carol, the American directs a family drama that splits its action between 1927 and 1977. Rumours suggest that the first section is presented as a silent film. It sounds very Haynesian and not just because his old mate Julianne Moore is among the starry cast.

Viewed from a distance, the Cannes Film Festival looks to be all about the much-scrutinised competition. That race remains the best measure of how high-end cultural cinema is drifting. But there is much else going on.

When the programme emerged, it seemed as if Frémaux was engaging with the debate about how cinema and television now often swim in the same pools. Episodes of both David Lynch’s Twin Peaks and Jane Campion’s Top of the Lake will be screening out of competition as part of the official selection. There will also be a presentation of Alejandro González Iñárritu’s new virtual-reality project.

But the festival director struck a cautious note when discussing developments with Variety. “Cinema remains a singular art,” Frémaux said. “We’re open, curious. I’m not a big fan of series myself, and I don’t quite understand all the hype about the Twin Peaks series, but we at Cannes prize fidelity and generosity towards auteurs whom we value and have a forged a long relationship with.” Campion and Lynch are of course both previous winners of the Palme d’Or.

What else do we note? Politics is everywhere this year. A few weeks after one of the oddest presidential elections in the Fifth Republic’s history, the festival – set on the Mediterranean, remember – will swell with films on the continuing refugee crises. Iñárritu and Haneke both address the subject. Vanessa Redgrave makes a belated directorial debut out of competition with the documentary Sea Sorrow. Kornél Mundruczó’s Jupiter’s Moon, competing for the Palme d’Or, is also considering the topic.

There is still work to be done in increasing female representation. There are just three films by women in the main competition. It’s been worse, but they could do better.

Then there is the intriguing lack of any Hollywood studio films in the official selection. It seems vulgar to even mention it. But, remember that, in the last five years, such pictures as Mad Max Fury Road, Inside Out, The BFG, How to Train Your Dragon 2 and The Great Gatsby all premiered here out of competition.

A studio flick often sneaks into the competition. There was an expectation that Frémaux would add such a release at the last moment. But it hasn’t happened. We’ll just have to console ourselves with the most promising line-up in the main section for close to a decade.

The Butcher Boy is back – a murderer still among us
9

Scary tales of New York: life in the Irish slums
10