Benedict Cumberbatch: ‘It’s fantastic to realise how insignificant you are’

The Imitation Game star chats about Sherlock, Star Trek and our place in the cosmos 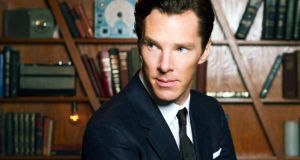 I’m about to be introduced to Benedict Cumberbatch when some autograph hunters intervene. He cheerfully obliges, even when one signature becomes a dozen. “And could you sign this one for my sister?” becomes something of a theme.

If I hadn’t known before that the star of Sherlock and Star Trek: Into Darkness was the most popular man in Britain, I’d know it now.

He finally bids his fan club farewell: “Not at all,” he tells them. “One of the perks of the job.”

He bounds over and reaches for a giant dark chocolate Toblerone. “I am sorry,” he tells me with a firm handshake. “But I do need sugar.” He politely pushes the big triangle into the side of his mouth so that he can keep talking. The effect is to sharpen his already razor-like cheekbones. “I wish there was a more decorous way of doing this,” he smiles.

I can’t think of one. This is exactly how I would expect a Mitford sister to eat polyhedral- shaped confectionary if they had lately been accosted by Cumberbitches. But the 38-year-old can’t find cause to complain.

“You have to pinch yourself,” he says cheerfully. “To have a professional life where you get to tell stories and people respond? It’s kind of wonderful. Magic, actually.”

Not that Cumberbatch is impressed by celebrity. Even his own. BBC’s Sherlock has catapulted him to the top of Sexiest Man Alive and Britain’s Greatest Thespian polls. But such things are of little consequence to Benedict Timothy Carlton Cumberbatch.

“However lost in showbiz someone can get, I’ve never met anyone who really believes that that’s all there is,” he says. “Can you imagine what a dead end that would be artistically? How could you feed your head like that?”

Benedict Cumberbatch is a thinker. He practises mindfulness and meditation. After Harrow, he spent his gap year reading The Tao of Physics while teaching English in a Tibetan Buddhist monastery in Darjeeling. Between gigs he likes to draw and stare at the moon.

He smiles: “So much more exciting than what somebody is wearing, don’t you think?”

Cumberbatch is the son of jobbing actors Timothy Carlton (Minder) and Wanda Ventham (UFO). Ten years ago – pre-Sherlock – it looked as if the younger Benedict, a recent graduate from the University of Manchester’s drama department, had quietly signed up for the family guild. He was a respected character actor, a best-kept industry secret.

Critics across various media had already noted his mad skills: by 2005 he had bagged his first Oliver Award for his performance as George Tesman in Hedda Gabler. The following year he earned rave notices for his turn as Pitt the Younger in the William Wilberforce biopic Amazing Grace.

“We should be celebrating Hawking every day,” says the actor. “His continuing existence against the odds is remarkable. But the way he popularised science was revolutionary. He made science sexy before Brian Cox started popping up on the telly looking gorgeous.”

Cumberbatch has since played theoretical physicist Werner Heisenberg in Michael Frayn’s play Copenhagen and is currently the bookies’ favourite to scoop the best actor Oscar for his tremendously moving depiction of the pioneering computer scientist Alan Turing in The Imitation Game. It’s almost as if he’s collecting scientists like trump cards.

“Ah,” he grins. “You remembered Heisenberg. Good for you. Honestly, there’s been very little overlap for me. These men are all brilliant and extraordinary. But they have as much in common with the comic foils or Joes next door that I’ve played as they do with one another.”

Cumberbatch is a talker. He manages to chatter amiably and endlessly about himself without divulging the kind of factoid a snoopy reporter might cherish. I don’t hear anything about his new fiancée, the theatre and opera director Sophie Hunter. But I do learn that he was “quite passably good at French at school but not good enough to quibble with subtitles”. I now know that he likes coconut and sweet things. His dad’s favourite film is Les Enfants du Paradis.

You can hardly get a word in. Especially when he’s talking shop. He straightens up. He folds over. He gestures.

Cumberbatch is a bouncer. He may be voicing Shere Khan in the new Jungle Book, but Tigger must surely be his totem animal.

“Turing’s parents fostered him out because they were in the diplomatic corps,” says Cumberbatch, as he giddily pea-shoots facts. “When they returned after four years, he had a stammer. He was horribly bullied at school. He was buried alive. He finds someone he loves, someone who inspires him, and from all that, we get Alan Turing looking at a room full of female clerks performing equations and wondering if the process might be mechanised.”

Some critics have unfairly criticised The Imitation Game for not foregrounding Turing’s homosexuality. Cumberbatch is quick to defend the project.

“I asked people who knew him, if they knew he was gay. Was he camp? They all said no. It never occurred to them. People just didn’t think about those things. And he didn’t parade it. He didn’t want to be found out. His tragedy was that he had to keep it secret.”

It’s not surprising to learn that Cumberbatch sought out Turing’s former friends and colleagues. A dedicated practitioner of his craft, he’s known for immersing himself in research. For his award-winning turn in Danny Boyle’s Frankenstein, he studied autism so that he might grasp how a fully formed man, with no infancy or childhood to reference, might behave.

“I went to schools and met people, some of whom are very high functioning on the autistic spectrum. I met a 17-year-old who had the mental age of a one and a half year old. Everything was just about bodily functions. Smell. Sexual arousal. Shitting. Whatever. So when I hear people use diagnostic labels casually – Sherlock is autistic, Turing is autistic – it really upsets me.”

He pauses for a nanosecond, then continues to talk: “And it upsets me those 17-year-olds were coming to the end of their care. Because after that they’re supposed to head into employment and earn revenue for their government. Ha. Because from early on you’re empiricised in that Orwellian sense.”

He smiles: “Sorry. I’m getting political.”

He insists he isn’t always so diligent. “People do say that I research a lot. And it’s true that I generally never stop researching. But I do have a home life that doesn’t involve being Alan Turing. And sometimes research can be counterproductive. Sometimes you have to rely on instinct.

“I’m doing Richard III now, and since we found his remains, we know how he died and what he ate. But that’s not Shakespeare’s anachronistic version, which is silly and wonderful and has a million possibilities. So many ways to do it.”

One suspects he’ll get through most of them. Cumberbatch recounts how he likes to give directors and editors as many options as possible, almost as if he’s describing a human Turing Machine.

“Now there’s an analogy. If only I had the time to do that many variations. I know there are actors who know exactly how to author a role. But I like to trust others with authorship. I’m not sure I trust myself. You always want to do a better days work than you’ve done. I get horrific l’esprit d’escalier in the car home. ‘I didn’t play that beat. Oh fuck’.”

He smiles: “Sometimes I really beat myself up. It’s bad. I know. But sometimes you get these moments when you’re acting, And something happens that you can’t explain. And it’s just transcendent.”

Joe Dante: You have to give a movie time to age, like wine
2

Britain and Europe in a Troubled World: A wise guide to Brexit
8