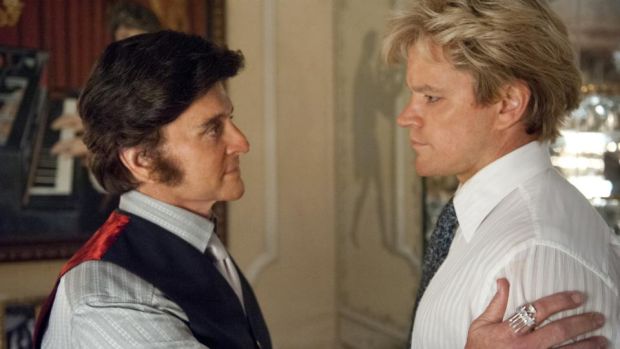 Film Title: Behind the Candelabra

The olden days were often bloody awful. Younger readers may be surprised to hear that there was a time when large swathes of the mainstream refused to admit that homosexuality existed. Camp stars such as Larry Grayson, John Inman and Frankie Howerd were, you understand, just “putting it on” for the cameras. If they weren’t, they wouldn’t have been allowed on the telly. Right?

Liberace hires a plastic surgeon and begins carving Scott into an image of himself. He proposes an “open relationship” and then freaks when his lover (also chauffeur, secretary and pseudo-son) looks sideways at another man. Eventually he casts him aside like an empty caviar tin.

You couldn’t say that Behind the Candelabra doesn’t have its funny moments. Rob Lowe is magisterially hilarious as a plastic surgeon who, his face now an anguine pyramid, has indulged in far too much of his own dangerous medicine. Damon makes something comically pathetic of an innocent astray in Bluebeard’s Castle.

The distributor’s decision to flog the film as a brash comedy seems a tad dishonest (and counter-productive). The version of Liberace presented here is a monster of ego and self-regard, and the casting of Douglas is significant.

That actor has played heroes and villains, but he is always at his best when oiling his way through sleazeballs. The few moments of disinterested kindness the script allows Liberace are counteracted by the sheer clamminess of Douglas’s delivery. If the same lines were delivered by, say, Greg Kinnear (or an older Damon, for that matter) we might be prepared to forgive the star his moral infelicities. Soderbergh and Douglas allow no such easy deflections. The movie is, at times, closer to horror film than a comic romp.

Still, Richard LaGravenese’s script is careful to gesture towards the gay life to come. The film, set in the late 1970s and early 1980s, begins with Scott sitting in a bar listening to the irresistible sounds of Donna Summer. One gets the sense the film-makers are covering themselves against accusations of smothering the gay world in retrospective misery.

After all, prejudice still exists. Rumours abound that Behind the Candelabra ended up being made for cable television because the studios thought it “too gay”. Whatever the truth of that story, the picture (which screened on HBO in the US two weeks ago) has ended up looking more contained than your average theatrical release. Soderbergh has, presumably, consciously layered on the claustrophobia. But the tightness of the framing and the chamber-piece blocking occasionally seems just a little oppressive. Much of Behind the Candelabra could work as a stage play.

That noted, Soderbergh’s latest film – let’s not pretend it’s his last – emerges as a serious piece of work that makes brilliant use of many indomitable professionals (hats off to Debbie Reynolds as Mrs Liberace and to Dan Aykroyd as the pianist’s manager). Liberace’s fans won’t like it all that much. Mind you, do such people still exist?