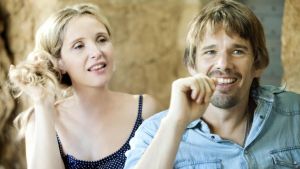 There is, at the start of Richard Linklater’s satisfying conclusion to a beautifully balanced romantic trilogy, a fine (almost certainly accidental) joke about the impossibility of withholding all plot revelations from even the most cautious of audiences.

Before Midnight continues – and, possibly, completes – the story of the fiddly, emotionally unstable romance between the cutting, incisive, slightly pretentious Celine and the impulsive, passionate, distinctly pretentious Jesse. Played with irritating brilliance by Julie Delpy and Ethan Hawke, they wandered around Vienna as young adults in 1995’s Before Sunrise.

Nine years later, in Before Sunset, they encountered one another again in Paris. That film ended with a gorgeous cliffhanger. Having accompanied Jesse, now married with a son, about the city and manoeuvred him towards her flat, Celine warned him that he was about to miss his flight. “I know,” he said. Were they about to properly link up?

Before Midnight begins with a prologue that pretends to tantalise. We are in a Greek airport. For five minutes, Jesse makes small talk with his teenage son before sending him on his way to Chicago. Then he makes for the exit, turns a corner and encounters Celine standing beside twin daughters who, all curly blonde hair, swell to bursting with her unmistakable DNA. It would be a triumphant reveal if the two actors weren’t on a thousand posters and if trailers everywhere did not reveal the key scenario.

None of which matters very much. The Before films have never been driven by plot. Inflated by chatter, always slightly aghast at their principals’ preciousness, the pictures are about the dynamics of conversation and the internal machinery of love.

The first lengthy interchange between Jesse and Celine showcases Linklater’s technique to great advantage. Taking place in one enormously long take (shot through a car windshield in the style of Abbas Kiarostami) the scene follows the couple, their daughters sleeping behind them, as they tiptoe into a dispute that will take the entire film to play itself out.

Jesse bemoans the fact that he can’t see more of his son. Celine (who is close to the boy) immediately interprets this as a coded request that they consider moving back to Chicago. He doesn’t actually say anything of the sort. But, as the film progresses, it transpires that she was definitely on to something.

Thus the war of the sexes is waged: male literal truths stand up against more nuanced female arguments. If a Hepburn vs Tracy slap-down were played out in mumblecore, this is what it might look like. (Though Linklater chooses, instead, to reference Roberto Rossellini’s Voyage to Italy.)

Purists may complain that Before Midnight deviates somewhat from the template established by the earlier pictures. Rather than walking around one of Europe’s great cities, Jesse and Celine find themselves holidaying on a sparsely populated Greek island.

Veteran British cinematographer Walter Lassally, who shot Zorba the Greek, is cast as a novelist hosting a house party in a beautiful villa. Athina Rachel Tsangari, director of Attenberg, plays one of the guests. The setting allows the characters to reference the eternal harmonies of Greek drama as they progress towards a blazing, personal catastrophe.

The same purists might also worry that the new film casts a little too much reality onto the lovers’ hitherto idyllic universe. In the previous films, the flawless, untroubled romance promised by fairy tales was still a theoretical possibility. For all the smart dialogue and playful acting, the opening sections were still at home to a class of high-end sentimentality. (The character may have been unhappy, but a thrilling escape was in their grasp). By way of contrast, Before Midnight constantly rubs against the knottiness and prickliness of this rubbish we call real life.

All this just serves to make the romance that bit more poignantly raw. None of the films is faultless in itself, but, tinted with complementary tones, the complete cycle comes as close to perfection as any trilogy in cinema history.

None of which is to suggest we wouldn’t want them to risk another, even sadder, episode in a decade’s time.

Versatile Dublin rappers: I'd like to thank all the smack heads on Abbey Street
9