Army of the Dead: Inventive pulp on a massive scale

Review: Zack Snyder has a ball proving trash can triumph in this zombie horror heist flick 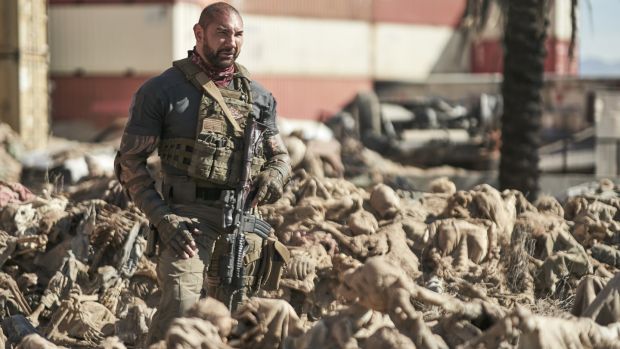 Dave Bautista as Scott Ward in Army of the Dead. Courtesy of Clay Enos/Netflix © 2021

Film Title: Army of the Dead

Nobody reckoned that Zack Snyder was ever likely to become the next John Cassavetes, but, for a year or two, there was some hope he might become a class of sugar-rushed John Carpenter. His 2004 remake of Dawn of the Dead – employing, of all people, Sarah Polley as a zombie hunter – was better than any such thing deserved to be. The plasma-soaked, ear-splitting, historically deranged 300 was hard to dismiss from your poor throbbing brain. Then came the awful Watchmen. Then came worse.

To suggest that Army of the Dead is Snyder’s best film since Dawn of the Dead is not to suggest much, but we are forced to conclude that his natural milieu does seem to be zombie flicks whose titles end in George Romero’s favourite three words.

This seismologically cacophonous horror heist is religious in its commitment to forward action. It knows that its key audience is as eager for the morally uncomplicated kills of the Resident Evil games as it is for the satire of Romero’s work. You get all that in a huge package groaning with revolting violence and unsurprising musical cues.

Somebody must have made a film with this premise before, but this is surely the first time the high concept has made it to high budget. Dave Bautista, the only man large enough to remain undiminished amid the bellowing Snyder aesthetic, plays one of a party tasked with breaking into zombie-infested Las Vegas and robbing stacks of money from a seemingly impregnable safe. It’s Escape from Ocean’s 11 of the Dead.

Snyder gets us to that place with admirable efficiency. Weaponised zombies take over part of the US. They are corralled in Vegas. The government announces that, in just three days it will drop a nuclear bomb on the sandy city and turn the problem into radioactive glass.

But a Japanese businessman has a proposal. Dave, Dave’s daughter Ella Purnell, safecracker Matthias Schweighöfer, helicopter pilot Tig Notaro (digitally inserted into the action following allegations of sexual harassment against Chris D’Elia) and others make for the city with dollar signs spinning in their corneas.

The actors work hard at making us care about characters whose dialogue plays as if composed from a William S Burroughs cut-up of action movie cliches. They are assisted by an endlessly inventive series of special-effects sequences that never gouge out an eyeball when an entire head can be crushed into meaty porridge.

The result is inventive pulp staged at the scale of a continental invasion. Freed from the pretensions of his DC projects and working with the Netflix charge card, Snyder has a ball proving that trash can triumph on the largest stage if played with elan and enthusiasm.

It is, in short, a hoot. We look forward to inevitable sequels.

On Netflix from May 21st