Anya Taylor-Joy: ‘This guy stuck his head out the window and said, If you stop you won’t regret it' 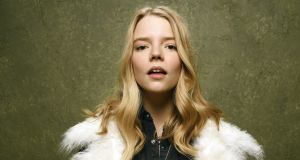 AnyaTaylor-Joy: the past year has been a bit of a blur, beginning with The Witch for which she scooped the Breakthrough Award at the 2016 Gotham Independent Film Awards 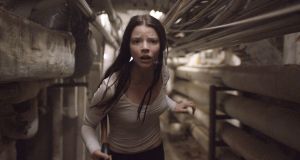 AnyaTaylor-Joy in Split, a twisty thriller from M Night Shyamalan

“Do you mind if I give you a hug?” asks Anya Taylor-Joy, already mid-pounce. “I’m an Argie,” she explains later. “We can’t stop touching people. I’m a real love-bug.”

She’s not kidding. A geyser of enthusiasms – we’re totally digging the apposite second part of her surname – within the hour she has declared herself a fan-girl for Jamie Lee Curtis, Bill Nighy, Benh Zeitlin, and don’t even get her started on Disney films.

“Oh my God, I love Oliver & Company,” gushes the 20-year-old. “My mum and I say: ‘What a woman!’ to each other all the time. When I was growing up in Argentina, I was once out horse riding. The horse got spooked, I fell off and I had concussion. My mum’s immediate reaction was to put me in front of Oliver & Company and say: ‘Baby, sing the songs.’ That way she knew my brain was still intact.”

Taylor-Joy has a fascinating lineage. Her father is Scottish-Argentinian and a former power boast racing world champion. Her mum is a Spanish-English psychologist: “A real Stevie Nicks character,” says Taylor-Joy. “Always laughing and dancing and very passionate about the world.”

Anya is the youngest – by far – of six siblings: her nearest sister is seven years older and her oldest sister is in her 50s.

“I’m lucky enough to come from a big family,” she says. “But then, because of the age gap, I was raised kind of like an only child. So I had the best of both worlds.”

The family moved to London when Anya was six. She initially refused to learn the language. Today she speaks with a hint of transatlantic and a slight Gallic lilt, though her accent, she says, is subject to change depending on current geographical coordinates.

“I was very lonely when we got here,” she recalls. “I thought if I refused to learn English, my parents would have to take me home to Argentina. I was in an international school but no one else there spoke Spanish. So I felt very isolated.”

As the youngest, she had always been tasked with flipping over the LaserDiscs during family movie viewings. That chore – coupled with loneliness – soon moulded her into a full-blown movie nut.

‘Away with the fairies’

“My parents quickly realised that no matter what was going on in my life, they could stick me in front of a movie and I’d be okay again,” laughs Taylor-Joy. “Because we only had a finite number of discs, I watched them all, religiously, again and again and again. I’m not a person that’s really grounded in reality. I’m away with the fairies.”

Having learned English – at home, the Taylor-Joy clan speak Spanglish – aged 16, she was walking through Knightsbridge when she became aware that a car was following her. She quickened her pace only for the car to speed up.

“Heart-pounding terror!” she cries. “When I was sure the car was following me, I started to run. But then, this guy stuck his head out the window and said if you stop you won’t regret it. That’s got to be a line from a slasher film. But I did stop. Dead in my tracks. And I’m so glad I did.”

The car contained Storm modelling agency founder Sarah Doukas, the same scout who plucked Kate Moss and Cara Delevingne from the streets. Within months she met Irish actor Allen Leech on a fashion shoot who, in turn, introduced her to his agent.

The past year has, she says, been a bit of a blur, beginning with her stellar turn in The Witch opposite one very naughty ruminant.

“It’s so funny because our relationships on set with Charlie the goat (who played Black Philip) actually mirror the ones on the film,” says Taylor-Joy. “Ralph [Ineson] and Charlie really did not get along. Charlie actually gored Ralph more than once. It was hardcore. But Charlie and I got along great. In between takes, we would lie out in the sun together.”

Taylor-Joy’s performance as a 17th-century teen scooped the Breakthrough Award at the 2016 Gotham Independent Film Awards: “It’s so weird,” she exclaims. “I can’t believe how lucky I am to be acting, full stop.”

The genre-minded honour is not bad for someone who has never really watched horror movies.

“I’ve now seen three horror movies,” she says, with a little cower for effect. “The Witch – although we never really thought of that as a horror while we were making it; more of a family drama in which bad shit goes down. I watched The Blair Witch Project because I thought that would make me cool with horror. It didn’t. I was terrified. And then I saw It Follows. Because I had worked with Mikey [Gioulakis], who was DP [director of photography] on that.”

Having declared, aged nine, that she was going to marry an Irishman – “It was the scene below decks in Titanic that did it” – Taylor-Joy was delighted to land the title role in Luke Scott’s Morgan, a science-fiction slasher film that was shot in Belfast. “I worked six day weeks and then spent every seventh day getting my hair dyed silver root to tip,” she says. “But I got to hang out with the Belfast crew, who were the best. And I got to see Ballymena and Ballycastle and all these great lakes. And a lot of fog.”

The last year, which also included a stint as the young Barack Obama’s chum in Barry, has been “madness”, but Taylor-Joy’s career looks set to get a good deal crazier. Earlier this month, the youngster was shortlisted for the Bafta Rising Star Award. This week, you can catch her in a multiplex near you, in Split, the latest intrigue from M Night Shyamalan. This reliably twisty thriller casts Taylor-Joy as the clever one among three teenagers who have been kidnapped and imprisoned by a man with 23 different personalities (James McAvoy, having an absolute ball).

That’s a whole lot of acting.

“I know,” she says. “It’s a big performance, in that there’s so much to do. But it’s also so nuanced. I always knew which of the characters I was talking to. James would flick up an eyebrow or purse his lips and I’d think: oh, he’s Patricia again: that’s interesting. I really felt like I was acting with nine different people, not some actor doing nine impersonations.”

Split, without giving too much away, may well mark a fun, new sub-genre: the secret sequel. “I’m really impressed at how protective people are about the twist,” whispers Taylor-Joy. “Obviously this works as a sequel or part of a trilogy. But it’s also a standalone movie. It’s amazing what Night did.”

Later this year, we’ll see Taylor-Joy playing opposite the late Anton Yelchin in Thoroughbred, his final film, and – so rumour has it – as Magik in the latest X-Men adventure. Now if only she can get used to seeing herself on screen.

“I could never not watch my movies because I’m not arrogant enough to think it’s just about me,” she says. “You watch a movie you’ve worked on and think: fuck, yes! Props! I remember that day and that shot was impossible. And it came out amazing. And then there’s me. I never think I’m good and I never think I’m beautiful. I don’t look in mirrors very much, so when I see myself onscreen I can hardly recognise myself. Except to think: egh. Stop, already.”

– Split is on general release