Andrey Zvyagintsev: ‘With Russia’s re-Stalinsation, there are negative tendencies’ 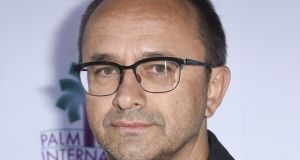 Russian director Andrey Zvyagintsev: “I am a pessimist who views the future with optimism.”

“Fortunately I do not speak a foreign language,” Andrey Zvyagintsev tells me (in Russian). “So I don’t know what they say about us or my films outside Russia. ”

They say much. They say he is among the most admired film-makers of his generation. Formerly an actor, Zvyagintsev, raised in bustling Novosibirsk, made an impression with his very first feature. In 2003, The Return, a sombre road movie, picked up the Golden Lion at the Venice Film Festival. Subsequent pictures such as Elena, contrasting rich and poor in Moscow, and the rural epic Leviathan secured his position as a successor to Andrei Tarkovsky and Alexander Sokurov. The damp, washed-out grandeur of his lengthy takes does nothing to inhibit the pace of gripping narratives.

The success has brought the right and the wrong sorts of pressure. Last May, Loveless, his latest picture, premiered in the much-feared opening slot at the Cannes competition. It survived the experience to become the most positively reviewed film of the event. There was, however, some muttering from the Russian contingent.

“This Russian reviewer gave the film a very negative assessment,” he says. “I asked him why. He said: ‘I liked the film, but I was a bit shocked at the finale with the heroine wearing a shirt with the word “Russia”.’ He said I must have made the shirt up. I explained that in 2014, in the wake of the Sochi Olympics, these sweatshirts were everywhere.”

Zvyagintsev laughs dryly. Here’s the problem. Somehow or other, his oeuvre has come to be seen as a running commentary on the state of the Russian nation. If Loveless is attempting such an examination then its diagnosis is not a happy one. Arguably his most compact work, the film tells the story of a horrible, horrible couple – selfish, acquisitive and insensitive – who barely seem to care when their troubled young son goes missing. Should we see synecdoche here? Does the family stand for Russia?

“I think that this approach is over-politicised,” he says. “My main concern was to talk about human nature. I was talking about lack of empathy. I am talking about how people use other people as tools to reach their own objectives. We are making our films in Russia. So obviously it is set in a particular Russian environment. We have Russian actors, Russian settings, Russian attitudes. But at the same time it is not aimed a particular political problem.”

Hmm? Zvyagintsev is choosing his words very carefully here. He has to. His rise to prominence has been accompanied by increasing state suspicion. Misgivings swivelled into outright hostility with the success of Leviathan (winner of best screenplay at Cannes and an Oscar nominee). Right-wing politicians fumed at its fixation on corruption. Vladimir Medinsky, the minister of culture, objected to the negative portrayal of Russian society.

“Of course there was some criticism from the minister of culture,” he says. “But I never actually met him. I can’t say the criticism was that active. He made some statements to the media. There was some reaction to me at screenings. But it never went any further than that. The irony of the situation is, out of the five films I have made, Leviathan, which turned out to be the most critical, was the only one that did have financial support from the state.”

He went on to develop Loveless without any help from national funding bodies. Adding surreal degrees of accidental provocation, the conglomerate known as Walt Disney Studios Sony Pictures successfully distributed the new film in Russia (presumably Coca-Cola and Samsung were otherwise engaged).

This can’t have been how his generation hoped Russia would develop. Born in 1964, he attended drama school in Novosibirsk and then made his way to Moscow. He seems to have been busy enough as an actor before moving on to direct three episodes of a popular TV show. He is thus old enough to remember the Soviet years and to have witnessed the country’s confusing path to its current condition. One is tempted to argue that, to better understand that condition, we should look at Leviathan and Loveless. But I’m not sure Andrey would welcome the suggestion.

“Yes of course there were disappointments,” he says. “There are continuing disappointments. There were crashed hopes. I was very young when the Soviet Union ended. I was in my 20s. I was a student. I was starting my acting career and didn’t think very much about politics. In the 1990s there were real hopes. But now, with the re-Stalinisation and the re-Sovietisation, there are negative tendencies.”

To be fair, Loveless – nominated for best foreign language picture at the Oscars last week – offers no direct attacks on the state or its representatives. Indeed, the official world that surrounds the couple is characterised by some compassion. The police care. Bands of citizens gather to help search for the missing boy. Still, nobody could come away from Loveless with the view that it was painting a merry picture of contemporary Russia.

“It was quite successful,” he says. “In two weeks its box office return was 100 million roubles. That’s about two million dollars. That’s not a negligible amount for an art-house film.”

The director retains no illusion that his vision is an easy sell to mainstream audiences. His near-flawless last three pictures exhibit the grim pessimism of a Dostoevsky novel without the compensation of that author’s austere religion.

“It is not really pleasant to look in the mirror and see an unattractive image of yourself,” he says. “People say that the characters are contrived. ‘People like that just can’t exist.’ That is what happens when people see an unappealing image. But fortunately there are people who accept the view I offer. Like the famous Russian proverb says: you cannot blame the mirror when your image is ugly.”

When I ask him if he would consider shooting abroad, his caution frays a little and, in the course of speculation, he reveals truths about how he really views his relationship with the state.

“If there was something that would require me working outside Russia and if it came from within me then, yes. Why not?” he says before offering a sigh. “I can also not rule out a situation in which the authoritarian pressure in Russia increases to the point where it will be really hard for me to continue working there. In circumstances like that I could be forced out of the country.”

With all that in mind, he can hardly object to being described as a pessimistic artist. Can he?

“I am a pessimist who views the future with optimism,” he says.

Get your head around that.

The five features of Andrey zvyAgintsev

The Return (2003) Two brothers accompany their hitherto estranged father on a fishing trip. Strong on the cruelty of adolescence.

The Banishment (2007) Adapted from a novel by William Saroyan, The Banishment is the closest Zvyagintsev has come to a critical disappointment. Not that close. Stunning opening shot.

Elena (2011) A working-class nurse marries an elderly business tycoon in a picture that starkly exposes the economic imbalance in Russian society.

Leviathan (2014) In the style of a tundra western, Zvyagintsev’s fourth film investigates the various betrayals – personal and political – that poison life in a frozen village.

Loveless (2013) A squabbling couple, on the point of divorce, become only more estranged when their son goes missing. Contains one of the most heart-breaking shots in recent cinema.

Actress by Anne Enright: a writer performing at the peak of her powers
Real news has value SUBSCRIBE