Alternative Oscars: and the award for Grumpiest Loser goes to . . .

Donald Clarke on the best, worst and most awkward moments of the 89th Academy Awards

Casey Affleck won the best actor Oscar for his role as a grief-stricken father in, "Manchester by the Sea." It was the first Oscar for Affleck, 41, the younger brother of "Argo" director and actor Ben Affleck. Video: CLIP COURTESY A.M.P.A.S. 2017 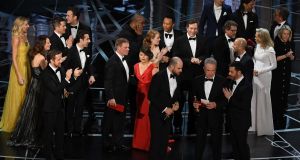 Best buck passing
Warren Beatty gets confused when the envelope that is supposed to contain the best picture winner holds a card re-announcing Emma Stone as the victor in best actress. He passes the card to Faye Dunaway who reads the only bit that looks like the title of a film. Do you follow? Don’t worry you’ll be watching this again and again until you die.

Grumpiest loser
We may be doing the great man an awful disservice, but when Casey Affleck triumphed for best actor, Denzel Washington adopted the face you’d expect see on a sulky infant denied a second bag of Monster Munch. Affleck had long been the favourite but most pundits saw Washington edging ahead in the final weeks. Maybe Denzel did win. Warren Beatty may well turn up to announce another reversal.

Best Tweet of the night
Obviously we’ll be enjoying memes based around the great Oscar error forever. But before things turned properly weird, the best tweet came from our old friends Jedward. The mighty twins spotted that Scarlett Johansson had a haircut much like their own and placed two photos of her side by side with the words “Scarlett Johansson Jedward” above them. They are truly national treasures.

Most unexpected new hyphenate of the night
That has to go to the newly accurate phrase “the Oscar-winning Suicide Squad”. Yes, that’s the truth. The Searchers didn’t get a single Oscar nomination, but one of last year’s most reviled films won an Academy Award for best hair and makeup. It almost felt like an amusing joke on the film-going community. Star Trek Beyond was robbed, my friend. Robbed.

Best attempt at an impossible job
Lowered expectations can be a wonderful thing. The news that Jimmy Kimmel was to host the Oscars was greeted with a mixture of indifference and hostility throughout the kingdoms. If such an apparently well-suited figure as Neil Patrick Harris could bomb then how would this less ingratiating figure perform? Surprisingly well as it turned out. He had just the right blend of sly cynicism and impish cheekiness. He will be invited back.

Best early arrival
Our own Ruth Negga did everything right. Her red dress by Valentino was gorgeous and, crucially, allowed her to stand out in long shots taken from the ceiling of the Dolby Theatre. Very cleverly, she also chose to be one of the first to arrive. This meant that she had a large section of the coverage to herself. This also meant that she got to the sausage rolls before Jackie Chan and Nicole Kidman got stuck in. They like the sausage rolls.

Best new celebrities
Gary and Vicky, obviously. Kimmel just about got away with a stunt in which unsuspecting passengers in a tourist bus were unexpectedly ushered into the auditorium. It was a bit patronising, but the genuinely excited Gary and Vicky, an engaged couple from Chicago, really made it work. One question did dog this segment though: who goes to LA and takes a Hollywood bus trip when the Oscars are on?

Most emotional breakdown
Sadly, nobody went through complete emotional apocalypse, but Viola Davis managed a fairly heart-wrenching performance when she won for best supporting actress. Every stop was pulled as she praised her family, her colleagues and God. Kimmel cheekily suggested that she should be awarded an Emmy for the speech. She already has one of those.

Most moving moment
That would have to be the arrival of Katherine Johnson on stage to help Taraji P. Henson, Janelle Monae and Octavia Spencer present the Best Documentary award. Ms Johnson is the mathematician, formerly with Nasa, played by Ms Henson in Hidden Figures. Now 98, Johnson, a holder of the Presidential Medal of Freedom, was wheeled on to tumultuous applause.

Best breaking of a duck
One of the great pieces of Oscar trivia is no more. Kevin O’Connell, a sound mixer, held, to this point, the record as Oscar’s greatest loser. This was his 21st nomination and, before the 89th awards, he had yet to win an award. His emotional response when he finally triumphed for Hacksaw Ridge was something to behold. Never has “best sound mixing” been greeted with such hysterical applause. It never will again.

This Mournable Body: The horror of simply being alive
Real news has value SUBSCRIBE