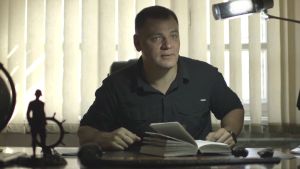 Controversial Ukrainian cleric Gennadiy Mokhnenko calls himself Pastor Crocodile, in tribute to the kindly reptile Gena the Crocodile, best pal of animated Soviet era icon Cheburashka. As this compelling documentary portrait opens, the pastor is chuckling over one of his adopted namesake’s Claymation adventures.

Ironically, Gena is a good-natured, accidental hero, whereas Mokhnenko makes Charles Bronson’s actions in Death Wish look like due process. “I don’t need permission to do good deeds,” he says.

The undeniably well-intentioned vigilante preacher is something of a celebrity in his native country, where he has saved hundreds of street children in a society that has collapsed to resemble something from Biblical endtimes.

Mokhnenko runs the former Soviet Union’s only drug rehabilitation centre for children. He rounds up his homeless, gaunt, needle- marked charges – some of whom are scarcely old enough for school – and takes them, often forcibly, to a facility he explains works “like a children’s centre” or “like a prison” or “like hospital” or “like police”.

He personally busts the pharmacies who illegally sell opiates to minors, and isn’t shy about bloodying a sexual predator’s nose: “We need civil action, not laws,” he says. A huge fan of Dostoyevsky, Mokhnenko and his wife have adopted 32 children. He is charismatic but no mindless thug.

Two of his cases, chronicled here, form a neat dialectic. In a filthy, corrugated iron shack, he finds a deaf, intellectually disabled girl who has been imprisoned there and raped repeatedly over many years. She cries for the baby that her captor has presumably fathered and taken from her.

In an equally filthy dwelling, inhabited by dozens of cats, Mokhnenko finds a pre-teen girl and a mother who prostitutes herself for vodka. The girl is distraught at the prospect of being removed, yet the pastor insists she’ll be better off with a “normal life”. The girl’s dead-eyed mother refuses to leave the animals – or the bottle – behind.

Executive produced by Terrence Malick and pieced together using archive footage of its subject – of which there is plenty – Steve Hoover’s film makes for a sympathetic,yet quietly critical portrait. John Pope’s dark lensing and Atticus Ross’s score add to the sense of unease and intrigue.