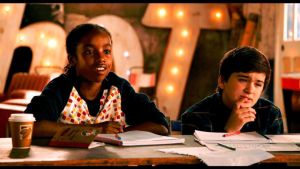 The bulldozers are revving in the distance and the fate of an urban tween refuge hangs in the balance. Ashley Jensen, the ill-defined proprietress of the ill-defined yoof centre, would love to keep the doors open but the council meanies have other ideas.

Enter enterprising Ethan (Theo Stevenson) and conscientious Jaden (Akai Osei-Mansfield), two kids with a dream of hosting and winning a talent show: surely the prize money and an unlikely dance crew – posh kids, tough girl, token fat child - can stop those bulldozers in their tracks and save the day?

Ah here. Get up the yard. Not this movie again. It’s bad enough that All Stars has the nerve to serve up the most overused plot in contemporary cinema: it’s worse that it does so in such a weedy, cosy fashion. The film’s attempts to woo an all-ages family demographic err on the side of kid-glove caution. It’s urban but only in the way that an urban planning association is; it’s street but only in the same sense as a carefully placed traffic sign.

Little kids will always need drug- free entertainments blanched off all tendencies toward potty-mouthed and potty-mindedness. Still, even the least worldly-wise, most cosseted youngster will smell a rat when Jaden’s parents prevent him from hanging out with an “edgy” Capoeira crew. Watch out, children! They have rhythm!

Interesting cameos and bit parts add some texture to a well-trodden groove. John Barrowman’s depressed dad is a bonus , as is Kimberley Walsh’s pram-faced council estate mum. Stevenson and Osei- Mansfield make for excellent company as protagonists weighted down by a screenplay Bosco might have rejected for lacking grit.

Does All Stars belong in a cinema house? Hell, no. The occasional (very occasional) imaginatively choreographed dance sequence – space invaders theme, paper samurai costume – can’t elevate the material above an afterschool special. That is if the afterschool special was broadcast in the 1970s, before drugs and swearing were invented.