Alexander Skarsgård: The most popular Swedish export since Abba

Alexander Skarsgård has followed in his father’s acting footsteps, and with ‘Generation Kill’ and ‘True Blood’ behind him, he’s finding new worlds to conquer in film 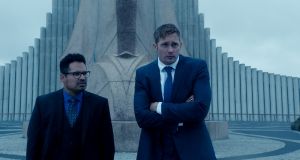 Alexander Skarsgård (right) and Michael Peña in ‘War on Everyone’, a bad cop comedy movie, written and directed by John Michael McDonagh, who previously made ‘The Guard’ and ‘Calvary’ 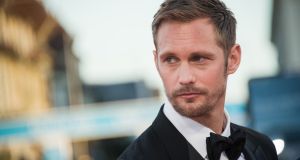 Alexander Skarsgard: ‘I’ve been on sets where directors and actors and producers manage through fear... it sucks being on sets like that.’ Photograph: Getty

‘I really hate monotony,” laughs Alexander Skarsgård. “I hate when things get too familiar and comfortable. There’s no better feeling than going out into the unknown.”

He’s not kidding. The most popular Swedish export since Abba really is something of an adventurer. In 2013, he made it to the South Pole, alongside fellow thespian Dominic West and Prince Harry, in order to raise funds for wounded soldiers. These days he lives in New York but still likes to head off with friends to “go completely off-grid or sailing for a month.”

A former child star – his role in the popular television show The Dog That Smiled made him a household name in his native country – he quit acting during his teens in favour of a stint in the military.

“As a rebellious teenager, I wanted to do anything but acting,” says Skarsgård. “I just wanted something different. I come from a very bohemian family. All pacifists. I grew up in Stockholm: a very urban environment. Definitely nor surrounded by trees. At that point, military service was technically still mandatory but very easy to get out of it. But I felt, well, this could be an interesting challenge.”

He served 18 months with anti-sabotage and anti-terrorism in the Stockholm archipelago before embracing student life at Leeds Beckett University in England.

Hang on. Leeds? Did he just stick a pin in the map? “Basically? Yes. I looked at universities in Ireland and Scotland and Wales, too. I knew I wanted to avoid London. I had so many Swedish friends in London. And they all hung out with each other. But I knew nothing about Leeds. I didn’t know anyone who had ever been there. It was a great experience. This dark, working-class, northern town. Perfect. It was exactly what I wanted.”

The eldest son of screen legend Stellan Skarsgård, Alexander has five younger siblings and two half-brothers. The numbers made for a bustling, chatty upbringing. “It was this big family of these weird, eccentric, bohemian people. There were huge dinner parties growing up. There were always people sitting around the table drinking and talking and eating.

“We were quite different from most of our friends. Today, I’m so grateful I had such a creative, social upbringing. But I had this idea for a couple of years that I just wanted my dad to wear a grey suit, drive a Saab, and carry a briefcase.”

He laughs. “I guess that’s just how bohemian kids rebel.”

He’ll soon travel to Berlin to shoot second World War drama Aftermath, alongside Keira Knightly. He can’t wait to use his new base to get back to his extended family in Stockholm.

Five of the younger Skarsgårds – Alexander, Gustaf, Bill, Sam, and Valter – have followed dad into acting. Alexander quit the business for almost a decade before he fell back in love with the idea while watching his father at Stockholm’s Royal Theatre.

“I remember hanging out backstage and seeing my dad and how much he enjoyed being around all these other people. Seeing his passion made me want to check it out again. And then I got stuck here.”

Getting stuck, as he puts it, didn’t happen overnight. Despite an early break and a few scenes in Zoolander \(2001), American casting directors were slow to warm to the charms of the statuesque 6ft 4in Swede. “In 2007, I had a moment when I thought: why am I here?” he recalls. “Why am I out here auditioning for the stupid boyfriend in a pilot show? Or the bad horror movie where I get eaten in the fourth scene by an alien? Whenever I read something interesting, someone established would swoop in and get the job at the last second. It was disheartening.

“And then along came Generation Kill. I only got lucky because they didn’t want famous actors in it. They were actually searching for unknowns.”

Generation Kill, a seven-part series detailing the exploits of the United States Marine Corps’ 1st Reconnaissance Battalion during the 2003 invasion of Iraq was a big break, but it almost scuppered the actor’s casting in another HBO series. Skarsgård was on location in Mozambique for Generation Kill when he got the call for True Blood, the vampire drama created by Alan Ball, the Oscar-winning screenwriter of American Beauty and Six Feet Under.

“I had met with Alan more than eight months before Generation Kill,” says the actor. “But I couldn’t come audition at that moment. Lucky for me, the writer’s strike delayed production on True Blood for four months so I could do both. I still had no idea how people were going to respond to it. And then it became this overwhelming thing.”

The ultimately iconic television show has allowed Skarsgård to alternate between interesting indie projects (The East, What Maisie Knew) and tent-pole releases (Battleship, The Legend of Tarzan).

This summer, audiences around the planet became familiar with his formidable abs as the latest incarnation of Tarzan, a role that demanded months of weight-lifting and Pilates, extensive training with the Royal Ballet choreographer Wayne McGregor, and the consumption of 7,000 calories (of meat and potatoes) every day.

“Shooting Tarzan was so physical and technical. There are lots of shots where you’re surrounded by wildebeests, meaning you’re actually surrounded by nothing. You have to be patient. And, luckily, the director David Yates is one of the loveliest men in the world. Even though it’s a big studio movie, he has a way of breaking through the hierarchy and keeping the atmosphere light and fun.”

He won’t name names, but he has known “troubled productions”: “I’ve been on those sets where directors and actors and producers manage through fear, where people are little people. Everybody wants to be somewhere else. They’re afraid of getting fired. It sucks being on sets like that.”

The Tarzan six-pack makes a return appearance in a very different guise in War on Everyone, a new bad cop comedy from John Michael McDonagh, the writer-director of The Guard and Calvary. “There are remnants of Tarzan in there,” laughs Skarsgård. “I just didn’t have enough time to do the Robert de Niro Raging Bull diet.”

War on Everyone follows two corrupt police detectives – Bob (Michael Pena) and Terry (Skarsgård) – as they bribe, extort, drink, and harass their way around Albuquerque. They are bad guys and even worse cops, but their unethical policing might just allow them to stop a properly depraved villain.

“I haven’t done a comedy in 10 years or so,” says Skarsgård. “I’m a big fan of John Michael McDonagh. I thought Calvary and The Guard were great movies. I was in London, shooting Tarzan, when I got the script. Obviously a very different movie, tonally. Tarzan is so heroic and earnest. So to dive straight into this crazy, broad movie where the character’s moral compass is completely off was so great. And, normally, you read a script – even a good one – and think: ‘Oh, it’s this movie’. I had no idea where War on Everyone was going.”

Ever the adventurer? “I guess so,” he says. “A lot of things happen internally when you’re in a new environment or doing something completely different. And I love those things.”

War on Everyone opens on October 7th