ADiff review: Mustang is a coming-of-age tale that turns into a thriller

Oscar-nominated Turkish drama is both brilliant and maddening 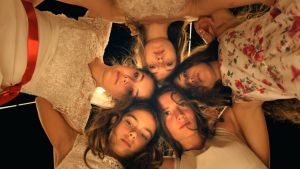 School’s out for summer and five orphaned sisters enjoy an innocent seaside splash-around with their male classmates in rural Turkey. The incident is reported to their grandmother, for whom piggybacks represent “pleasuring themselves against boys’ necks”.

Their furious uncle is summoned, virginity tests are performed at the local hospital, bars are erected on the family home and the girls are taken out of school to focus on future-husband obedience training.

Between visits from eligible young men and cooking lessons, the girls amuse themselves by pretending that mattresses are swimming pools.

Lale (Günes Sensoy, excellent), the youngest and most rebellious of the clan, is having none of it: she orchestrates a temporary and joyous escape to a football match where the spectators are all women (modelled after Fenerbahce’s 2011 Turkish league clash with Manisaspor) and plans to escape to Istanbul.

Deniz Gamze Ergüven’s brilliant, affecting Academy Award-nominated drama, loosely based on her own upbringing, initially resembles The Virgin Suicides only to swerve into nail-biting thriller terrain.