ADiff review: Further Beyond explores the life of Ambrose O’Higgins 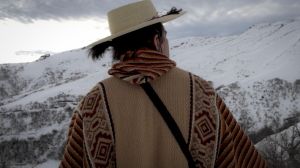 We have learned to expect the oblique from Desperate Optimists. Christine Molloy and Joe Lawlor, the co-operative that goes by that name, do not disappoint – although they may occasionally frustrate – with this discursive meditation inspired by Ambrose O’Higgins, the Sligo man who became captain general of Chile in the 18th century. “Certain genres set the alarm bells ringing, and the biopic is one,” the script explains. Thus arrested, the film-makers set out, with Godardian awkwardness, to dismantle the machinery of their own nascent project. The voice-over artists introduce themselves and become involved in satellite plotlines. Robert Flaherty, Susan Sontag and Steven Soderbergh are brought into the conversation.

The film ponders its own dishonesty in presenting a composite location as a single property. Happily, there is enough wit and imagination on display to dispel the wrong (non-Brechtian) class of alienation. Thomas Sterne might have got on well with it.

Lionel Shriver: ‘I do not want to be told I'm privileged’
Real news has value SUBSCRIBE