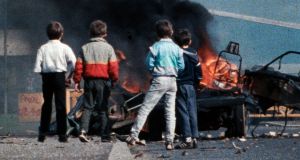 From ‘The Image You Missed’

The Image You Missed, the keenly anticipated second feature from Donal Foreman, opens with an unusual credit: “A film between Donal Foreman and Arthur MacCaig”. The film is just that: a dialogue between two film-makers.

A rather complicated and sometime otherworldly dialogue.

Foreman, who grew up in Dublin’s North Strand, had met his father, Arthur MacCaig, on only a handful of occasions before the latter’s death in 2008.

“There was a few times when I was very young,” recalls Foreman. “When I was 10 or 11 we went to Paris to meet him. At that age, there was a lot of expectations about having a father that were not met. We met again when I was 21 or 22, just a couple of months before he died. That was different, because it was two adults – two film-makers – speaking to each other. That meeting gave me a lot of peace, because I realised I hadn’t missed out on having a father. There was no father there. It wasn’t something he was capable of being.”

Foreman’s excavation of his late father’s Parisian archives forms the spine of this fascinating new documentary. There is unlikely to be a more moving moment in any Irish film this year than when the film-maker notes that his father died without possessing a single picture of his son.

Despite this, Foreman’s engaged, curious narration never wavers or betrays any sense of sorrow.

In a way I’ve made a ghost of my father. I’ve made him a more tangible part of my life than he ever was before

“There’s a paradox about making a film that you can use it to get closer or reflect on something in your life,” says Foreman. “But there’s something about exploring personal stuff through the medium of film that gives you a distance and perspective. That makes it easier in a way. The times I felt most distressed or at my wits end while making the film weren’t because of the personal content. It was the formal challenges. It was working out how to cut from [one] image to another. It was only after I screened it for the first time that I slowly started to come back into contact with the subject matter.”

This already intriguing exercise in psycho-geography is made doubly Freudian by its political dimension.

The Image You Missed is as concerned about Ireland as it is with Foreman’s largely absent patriarch.

“If it had been just about my father and my relationship with my father, without those added layers about politics and history and cinema to engage with, I don’t think I would have made the film,” says Foreman. “Tackling those narratives at once excited me. I saw his archive as a pretext to grapple with a lot of interesting questions and challenge myself as a film-maker to deal with political questions that I hadn’t found a way to do in my films before. That idea of inclusion and exclusion, of what you leave in the frame and what is excluded. That relates to the Freudian thing and that was one of the questions I had in my mind.”

On his mother’s side, the Foreman family has republican heritage going back to the 1916 Rising. Arthur MacCaig, conversely, was born in Weehawken, New Jersey in 1948. Notwithstanding his origins, as Foreman’s film repeatedly demonstrates, MacCaig had extraordinary access to the members and activities of the Provisional IRA.

“He formed a lot of links and friendships that lasted for all of his life, really,” says Foreman. “When he died in Belfast in 2008 he basically had a republican funeral. Danny Morrison and Joe Austin spoke at his graveside. Gerry Adams came to the funeral, although he was late. During the later years, his films were on sale in the Sinn Féin bookshop. His first film, The Patriot Game, proved to people where he was coming from. And he kept coming back to Belfast. He ended up living there because his last wife was there.”

Premiering in 1979, The Patriot Game charted the history of Northern Ireland from its inception in 1922, through interviews and clandestine street footage. It was, according to the Chicago Reader’s B Ruby Rich, the “best overview of the Northern Irish conflict that we’ve seen” and drew additional praise from J Hoberman in the Village Voice and Janet Maslin in the New York Times. Writing in the Guardian, Kevin J Kelley praised MacCaig’s film for “(debunking) the twin myths that the IRA is a ‘terrorist organisation’ fighting ‘a religious war’.” The film-maker would repeatedly return to the same subject matter, with Irish Ways (1988), The Jackets Green (1995), and A Song for Ireland (2005).

“One of my biggest problems with his films is that you’d never get the idea that there was more than one IRA or internal conflicts within the IRA,” says Foreman. “Those kind of negotiations, between people who believe in the same end goal at a certain level, but who are fundamentally different, is what I find most interesting about that political history. In his filmography the IRA is dealt with on an archetypal level. It’s the Brits and the loyalists and the republicans. There’s no mention of the Officials. All of the films deal with the Provisionals. That’s a real shame. Because that stuff is fascinating.”

Foreman’s work is rather more subtle in its political engagement. Out of Here, his award-winning 2014 dramatisation of post-emigration malaise, and his remarkable series of post-Celtic Tiger shorts indicate, as his friend and fellow director Maximilian Le Cain has suggested, a film-maker who “makes films like a social worker”.

Having spent two years grappling with more than a hundred hours of footage, you have to hope that Foreman got some sense of catharsis from the process

Foreman’s mother, not unsurprisingly, is the social worker and academic, Maeve Foreman, who emerges from the margins as the real hero of The Image You Missed.

“That was another strange part of making the film,” says Donal. “Spending so much time focussed on the person who wasn’t part of my life. Maeve is a great mother who has done so much to make me who I am. She’s more deserving of a film really.”

A looming theme in The Image You Missed is, nonetheless, the idea that Foreman, an émigré film-maker working from Brooklyn, New York, has somehow become a variation of his émigré film-making father. There are compelling counter-arguments. His mother’s uncle, Sean, was a keen amateur lenser and, as a youngster, Donal was surrounded by many notable figures from Ireland’s New Wave.

“So many of the people who I grew up around were involved in the film world,” he recalls. “My mother just happened to be hanging out with Jane Gogan when they set up the first Filmbase and Vivienne Dick and Pat Murphy. That was another interesting thing. I used some audio clips from Pat Murphy’s Maeve in my film. I talked to Pat about it over the years, and partly, she was inspired to make that film by seeing The Patriot Game. For her, my father’s film didn’t speak to the truth of the North or her experiences. It felt like it was sort of some kind of macho master narrative. And I wanted some kind of counter or corrective to that.”

Having spent two years grappling with more than a hundred hours of footage, you have to hope that Foreman got some sense of catharsis from the process.

“I get asked this the most and I keep changing my answer,” he smiles.

“Catharsis sounds like a weight being lifted or like a kind of exorcism. It hasn’t worked out like that. Because, in a way I’ve made a ghost of my father. I’ve made him a more tangible part of my life than he ever was before. And I now travel around with him.”