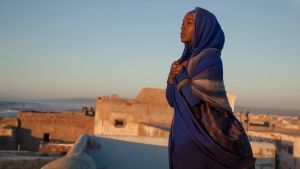 Film Title: A Girl from Mogadishu

Ifrah Ahmed came to Ireland from Somalia in 2006 and, apparently tireless, ended up as our most prominent campaigner against female genital mutilation (FGM). A founder member of the United Youth of Ireland, she has been gender adviser to the prime minister of Somalia and has worked with Unicef, Amnesty International and the Irish Refugee Council. A survivor of FGM and a former refugee herself, Ahmed is a credit to her nation and to the world.

It is, thus, a shame that Mary McGuckian’s biopic is so pallid. The viewer will certainly get much of the information he or she needs. Played as best she can under trying circumstances by Aja Naomi King, Ahmed travels from Somalia — Barkhad Abdi turns up as the dubious trafficker — in the belief that she is to join her sister in the United States. She ends up amid the chips and corn flakes of contemporary Dublin. When a doctor detects the signs of FGM, she is propelled on her campaign.

A Girl from Mogadishu resembles a documentary in a bad way and a good(ish) way. The detail is all here. The facts seem sound. Like McGuckian’s The Price of Desire, her film on Eileen Gray, A Girl from Mogadishu, is, however, shot in the bland, distanced fashion of the dramatised inserts for a documentary TV series. The effect is heightened by an endless, exhausting voiceover that too often tells us exactly what we are seeing on screen.

Excellent actors struggle gallantly with underwritten parts. Pauline McLynn is good in the middle-distance as a social worker. Stanley Townsend is not exactly the spit of former Labour TD Joe Costello, but his famous charisma adds energy to drama that rarely achieves even pedestrian pace.

It’s hard to know what to make of Niall Buggy’s cameo as President Michael D Higgins. Is it supposed to be funny? It might, perhaps, have been best to avoid even the suggestion of comedy by eschewing impersonation altogether.

A star on TV shows such as How to Get Away with Murder, King walks us through Ahmed’s achievement, but the script fails to satisfactorily flesh out her character. We get a sense of the campaigner and the survivor. We get less impression of the human being.

For all that, A Girl from Mogadishu has value as an educational tool. The more we hear about Ifrah Ahmed the better.