Fill the vacuum: concerts without context leave listeners none the wiser 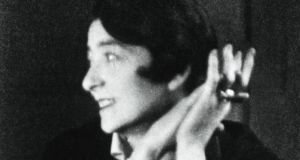 At the opening concert in ‘Eileen Gray and Music in the City of Life’ at Imma on Sunday, there was no date of birth or death, no mention of Eileen Gray’s taste in music or her connections with composers or performers

Three concerts in one week had me thinking about musical vacuums, not because of the music on offer or the way it was played, but because of the way it was presented. When you’re steeped in music and the practices of the musical world, it seems all too easy to neglect some of the basic contextual issues and not provide the acceptable minimum of background information.

I’m actually talking basics here, the kind of thing that needs to be on every printed programme: the names of the composers and their dates of birth and death; the name of the work (also translated if it’s in a foreign language) and the date of its composition; the constituent sections or formal movements into which its composer divided it; and original texts and translations for sung items.

What has me writing about the subject is that two of the concerts were promoted by two of the country’s most important schools of music, the DIT Conservatory of Music and Drama and the Royal Irish Academy of Music.

A talk on Groocock
On Wednesday, I caught up with the second of three lunchtime DIT concerts presented as Afterlight: Bach to Berio. Wednesday’s programme featured the music of Joseph Groocock (1913-1997) and Bach and was preceded by a short talk given by the former’s son-in-law, Andrew Robinson.

Joe, as he was universally known, was as lovable a teacher as you could wish for, always engaged and engaging, provocative and willing to be provoked, especially if the subject was his greatest obsession, the musical world of Bach. I studied with him and have the fondest memories of his gentle, caring manner.

The talk highlighted one of his favourite questions when looking at student efforts in harmony or counterpoint: “would Bach have done that?” It also recalled his statement that “I compose a fugue every day except Christmas Day, when I compose two” and put on record his response to his final illness: “So this is dying. Bother! There has to be a better way.”

It didn’t shirk from mentioning his profound lack of sympathy for large swathes of 20th-century music, from Schoenberg to Stockhausen and beyond. As an introduction to the man and his milieu, it was spot-on.

The performances worked less well. Balance problems marred the David and Goliath instrumental line-up in the Sonata for Treble Recorder and Piano (Laoise O’Brien and Pádhraic Ó Cuinneagáin). Counter-tenor Stephen Wallace was anything but convincing in Bach’s cantata, Ich habe genug, where the instrumental ensemble, based around the RTÉ Vanbrugh Quartet, seemed stylistically at sea.

And Groocock’s own 1991 String Quartet sounded to me like the work of a man who knew well how to write music, but wasn’t really a composer. The material and the technique were there, but the bigger shape failed to convince. There were no programme notes for the concert, no texts for the Bach and no details of movements for the quartet.

Shades of Gray
Those omissions paled beside the shortcomings of the presentation of the opening concert in Eileen Gray and Music in the City of Life at Imma on Sunday. This is a series of three concerts, each with a name – Les Françaix, Les Ballets Russes and Les Femmes.

The only information about Eileen Gray given on the printed programme was that the “Enniscorthy-born architect and designer arrived in Paris, the City of Light, in 1902, at a time of unprecedented imagination and creativity.”

There was no date of birth or death, no mention of her taste in music or her connections with composers or performers, no explanation of why the particular works by Debussy, Poulenc, Ravel and Saint-Saëns had been chosen, no dates for the composers themselves or their works and no texts or translations for Poulenc’s Banalités or Saint-Saëns’s Violons dans le soir. And, incredibly, for a series being presented by the RIAM and Imma, the only mention of RIAM in the biographies of the performers (pianists Hugh Tinney and Alexander Bernstein, violinist Michael d’Arcy, soprano Lynda Lee and the Schumann String Quartet) was that Bernstein was a graduate.

The idea of a concert series in connection with Imma’s Eileen Gray exhibition is first rate, but with so many blanks, I’m none the wiser as to Gray’s actual musical connections. Did she go to The Rite of Spring in 1913? Or Satie’s shocking Parade? Or the still startling jungle music of Milhaud’s L’Homme et son désir? Was she interested in the world of cabaret and popular song? Did she share Parisians’ enthusiasm for jazz?

There was some excellent playing in the concert, notably Hugh Tinney’s meticulously detailed handling of the first book of Debussy’s Images, but that was more illuminating of Debussy and Tinney than of anything to do with Eileen Gray.

As educational institutions that train our young musicians, the DIT Conservatory and RIAM must be expected to operate to the highest standards in the concerts they devise and promote if they are to set the best example for their students. They’re not top of the class at the moment.

Hayden’s sonatas
The Hugh Lane Gallery is in the middle of a multi-year traversal of the piano sonatas of Haydn, with the concerts shared between two players, Peter Tuite and Fionnuala Moynihan.

The printed programme employs the numbering system of the widely-used Hoboken catalogue. Later scholarship has led to redating of quite a few of the sonatas, however, so that from those on Sunday’s programme the sonata number 3 is now believed to have come after the one numbered 5, and ditto for numbers 35 and 43. The simple provision of dates in the programme would be useful for anyone interested in compositional style in a series that mixes music from different decades of the composer’s life.

Moynihan’s actual playing was fluent and breezy, but in a way that often diminished rather than highlighted distinctions in character between pieces. On Sunday, her best playing came in the Trio of an unfinished Sonata in D, which she approached in an expressively probing way, almost as if she were playing a chromatic passage in a fantasia by Mozart.

God, make way for Gaia: A deity even atheists can believe in
10