Some session suggestions from the bank-holiday bonanza 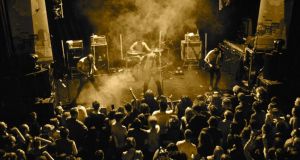 There’d be more hope of banging out some algebra classics on an abacus made of live eels and mussels than trying to count every festival happening in Ireland this year. Safe to say there is a larger than usual haul. Our festival landscape is a more slippery shapeshifter than Odo from Deep Space Nine on a Sambuca binge. As difficult as the things are to count, imagine how hard it is to keep one in hand.

Last year, Festival of the Fires opened its gates to festival freaks for the first time, a delightful debutante. Unfortunately, there were difficulties with the venue this year. The Hill of Uisneach, which lies at the heart of the affair, is an ancient and significant ceremonial site; you can’t go messing with those places without the little people putting the evil eye on you (I’m talking about fairy folk here, not town councillors). The bonfires are promised to return next year, but the fiery folk are undeterred, keeping her lit by having a hooley at the Uisneach Inn on Saturday and Sunday, with The Original Rudeboys, The Rubberbandits and Ryan Sheridan providing the buck-lepping soundtrack.

Not only will festivals come, go, postpone and re-home, but there’s a Judean People’s Front-slash- People’s Front of Judea thing going on. First it was the existence of two National Hen-Racing Championships – a pecking order is yet to be established (I couldn’t help it!) – and now the year’s second Father Ted festival is happening this weekend. This one isn’t on any Aran Island – it’s in Fanore, Co Clare, and takes the iconic parochial house as it’s focal point. I’m not sure it will have the same concentration of lunacy that ferrying faux fathers to Inis Mór generates, but if you want tea and scones in the house and your picture taken at the gate, this is an ecumenical matter for you.


FOOLS’ GOLD
I’ve managed to count 32 festivals happening this weekend alone and I’ve no doubt the session surface has only be scratched. What is a festival freak to do? I’m hitting Vantastival on Friday and then slinking down to Das Kapital on Saturday and Sunday for the Meteor Camden Crawl. Those two are the top dog rock ’n’ roll circus offerings, but there’s something for everyone in this weekend’s bumper bank-holiday lucky dip.

Last year, Kilkenny Rhythm and Roots got the drop on all the cool cats by an early and savvy booking of Alabama Shakes. This weekend’s outing sees Angel Olsen already sold out, but Riff Raff, Ed Romanoff and The Lost Brothers are all worth a gander too. This festival is a doozy, deservedly in the Top Five of this weekend and any weekend anywhere.

By name alone, Festival of Fools attracts my attention. I got something of a taste of what to expect from these circus folk when a clown from Belfast offered me a slug of his Buckfast at a similar festival in Tralee. They’ll be tumbling, trapezing, tightroping and twirling all through the weekend in Belfast. Freaks and sideshows to astound and entertain. Roll up, roll up, it’s another beauty. Keep sketch for Lords of Strut who’ll be banging out old-skool techno classics in the most unexpected places.

For a bit of rural charm and character, steer towards Bowling Around The Bog in Fenor, Co Waterford. Not the bowls that gentry roll gently down manicured strips of lawn – this is road bow-els, usually taking place within nine shots of a country pub. Ardara, Co Donegal, the “home of festivals”, will host the wonderfully named Cup of Tae Festival. Trad-type kicks washed down by buckets of tae.

If the extensive selection of bank-holiday shindig is leaving you scatter-brained there’s always the option of staying at home to watch Brendan O’Connor on The Saturday Night Show , it promises “a lively mix of entertainment, chat, music and lots more”.

John Creedon: The outsiders who left their names in Ireland
9