Féile Draíochta in Dublin was more like a seminar than a pagan bacchanal. And Ennis Festival of Light should carry a health warning: may be beneficial to your health. 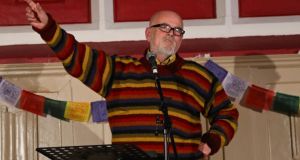 How deep is your chakra: singing teacher Archie Simpson at Trailblazery 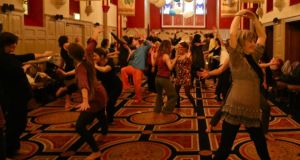 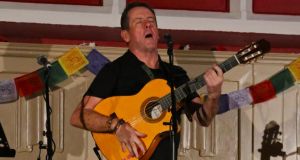 Have you ever been to a solemn novena? There’s enough of the things advertised on poles and hoardings around the country to suggest that somebody’s attending. The fact that I’ve never novena’d undoubtedly points to weakness of character and a frivolous nature; the “solemn” part of the shindig description does nothing to tempt me to whip out the rosary beads and bend the knee.

There’s an audience out there, though – the crowd in the moshpit when The Priests ripped into their set at last year’s Eucharistic Congress finale in Croke Park is testament to that. The Catholic Church knows festivals: it’s been running gigs since before Jesus pulled a crowd of 5,000 to a lacklustre food festival just outside Bethsaida. The pagans and some assorted sects have been at it longer, though, and they’re stoking fires, throwing shapes and making a comeback.

Féile Draíochta is a festival of Irish magic and spirituality that’s been running for 10 years, where the Irish pagan community congregates, celebrates and demonstrates its activities. I arrived at a city-centre hotel for this gig, only to be met by people at the reception desk handing out name-badges and timetables for the lectures that were taking place. Where were the cauldrons, black cats and matted-haired hippies? I felt cheated.

A talk delivered by Janet Farrar and Gavin Bone on The Evolution of Modern Witchcraft was intriguing. The speakers are practicing Wiccans and prodigious authors in that area. During the discussion, Gavin made some jokes that everyone found hilarious, and as I sat there laughing uncomfortably late and for far too long, I couldn’t help thinking that if the Wiccans needed to single out a non-believer for some nefarious purpose, they’d have no bother.

Witch way up
Gavin challenged those present to take their “vocations” seriously, by finding a way to use their practices to serve the community. During twinning celebrations in Athboy, Janet and Gavin’s coven were asked to perform a druidic rite at an ancient site for the assembled dignitaries and townsfolk. Local politicians engaging bona fide witches for a community event? The pagans are making progress.

SBNR (spiritual but not religious) is a stance and identity eating into an ever-increasing slice of the pie-chart of piety; it’s estimated that 72 per cent of Generation Y in America claim SBNR when asked about their beliefs. We’re probably some way off those figures yet, but there were definitely some spiritually independent souls knocking around Co Clare last weekend for Ennis Festival of Light. This was the first outing for an event that set out to spark a light in people through yoga, meditation, music, movement and inspiring banter. Not your usual festival offering.

It was strange to be facing into a festival weekend that offered the prospect of feeling energised and healthier on the other side of it. I was game for giving the downward dog pose a lash; it’d be a refreshing change from the usual weekend sick-as-a-dog default fetal position. Be under no illusions here: the only way in which my body resembles a temple is that shoes are left on the outside and you’ll usually find it locked around closing-time.

Not everything on offer over the weekend shook my chakras, and my critical faculties were suspended at times, but after meditating with a clairvoyant healer, throwing freestyle shapes to primal grooves, taking early-morning yoga classes and listening to the chats from the Trailblazery crew, I felt like I’d been on a little holiday. There’s a lot to be said for balance, and they must have sparked something: I found myself making lentil and vegetable soup last Monday evening instead of considering a cure. Donning a bindi isn’t on the cards just yet, but I’ll be checking out the Winter Solstice shenanigans at Dowth and Newgrange in mid-December.

In the meantime, I’m keeping sketch for a jovial novena.