Embracing and commemorating events of 1916 throughout the year

Children central to events to mark 100 years since Easter Rising

Teachers at Scoil an tSratha Mhóir in Glendowan Co Donegal have spent the year educating the students on the history of the 1916 Rebellion. Video: Ronan McGreevy 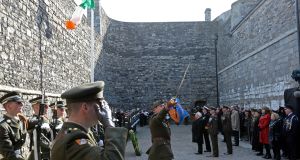 President Michael D Higgins at a ceremony in March 2016 in the Stone Breakers’ yard in Kilmainham Gaol where 15 rebels were executed in 1916. Photograph: Eric Luke

Kilmainham Gaol is a dark place. The sunlight leaves visitors squinting as they emerge from the dim corridors into the exercise yard outside. For the pupils of Stramore National School in Glendowan, Co Donegal, the 500 kilometre round trip to the former prison was an opportunity to connect to the stories about which they had read so much in class.

For many, the most compelling story was the marriage of Joseph Mary Plunkett and Grace Gifford on the night before Plunkett was executed. They know it from their history books and the song Grace made famous by Jim McCann. In the east wing of Kilmainham Gaol, they sang it in unison.

School principal Therese McMonagle said the centenary commemorations had dominated the school year. Even the Christmas show had an Easter Rising theme this year. “It really got the children in touch with the origins of the State and democracy,” she said. “That transmitted to the parents as well.”

Most schools in Ireland were involved in the commemorations. The children of the Patrician Primary School in Newbridge, Co Kildare, staged a play, Innisfree 1916, which imagines a conversation between the poet WB Yeats and the leaders of the Rising. Principal John O’Donovan said that if the purpose of the Rising centenary was to hand on to future generations a pride in Irish identity, then “following on from what I have witnessed in the production of our show, the future of our nation is in safe hands”.

The journalist and broadcaster Olivia O’Leary wrote in The Irish Times after the Easter weekend State commemorations: “We are the show and it was one of those times when people themselves became the occasion.”

If we were the show, the stars were the children. And, for them, many of the historical arguments of who was wrong and who was right in 1916 had no relevance. “Children took ownership of the whole commemoration. They put their hearts and souls into it in so many cases,” said Muriel McAuley, the granddaughter of Proclamation signatory Thomas MacDonagh.

A personal highlight of hers was the unveiling of the bronze memorial to her grandfather in Cloughjordan, Co Tipperary, and her three-year-old grandson Matthew’s embrace of the statue created by the sculptor Mark Rode.

The flags for schools initiative and Proclamation Day were exercises in nascent citizenship. Half of the pupils in St Mary’s National School, Saggart, Co Dublin, are from non-Irish backgrounds. Flags for schools was an opportunity for them to coalesce around a common symbol.

“I was in Australia back in the 1980s when they celebrated the bicentenary. It really gave everybody a sense of identity,” said Maria Nowlan, the school principal. “1916 was something that happened in the country these children are citizens of. It gave everybody a sense of being Irish and being part of something greater than their own little area.”

Éamon Ó Cuív, the grandson of Éamon de Valera, said the commemorations had been an “unmitigated success in so many ways. It really captured the kids’ imagination and in no way was it anti-British. It was focused on what our own people have been doing.”

Proclamation Day on March 15th was by common consent a huge success. Children were asked to write a proclamation for a new generation. Ideas for making the Republic a better place poured forth in torrents.

“I think we have left a really positive legacy for our children and for the next generation,” the Minister with responsibility for the commemorations, Heather Humphreys, said. “For the first time, we have had an honest and open examination of our history, with all narratives heard.”

The commemorations have been one of the biggest exercises in mass participation ever undertaken by the people of Ireland. President Michael D Higgins has been central to many of them. He attended 49 events at home and abroad.

The President emphasised throughout the year that the centenary was an opportunity to “celebrate our past and find renewed pride in our nation and in our place in the world”. Doing so, he stressed, did not mean ignoring the ways in which the Irish nation had fallen short and failed its citizens.

A permanent legacy of the Rising is planned through Creative Ireland, an endeavour to put the arts central to the national conversation, but what about the wider public? What has it taught us about ourselves? Will all of this be forgotten about when the new year rolls around?

As Olivia O’Leary observed last March: “What are we going to do, then, if it’s all to mean anything more than a great day out?”

Ronan McGreevy is the editor of Was it for This? Reflections on the Easter Rising published by The Irish Times Books.

O’Rahilly house at risk after being damaged by vandalism
7