Donegal poet and playwright Francis Harvey dies at age of 89 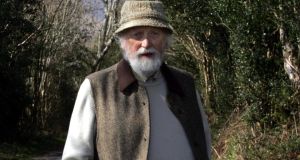 The death has occurred after a short illness of the Donegal poet, playwright and fiction writer Francis Harvey – he was 89. Photograph: Brenda Fitzsimons

The death has occurred after a short illness of the Donegal poet, playwright and fiction writer Francis Harvey. He was 89.

Born in Enniskillen, Co Fermanagh Mr Harvey, generally known as Frank, lived most of his life in Co Donegal, a county and its people he celebrated in unsentimental fashion in his work.

His first poem, about potato-digging, was published when he was 16, in the Weekly Independent, which was also the first to publish Patrick Kavanagh.

Since then he has published several short stories and had a number of his plays produced on stage and radio. His prize-winning play, Farewell to Every White Cascade, was broadcast on RTÉ in the 1960s and thereafter on the BBC and numerous radio stations around the world.

It was in the mid-1970s that he decided to leave the fiction and playwriting behind and concentrate on poetry. His first collection was in 1978, In the Light on the Stones from Gallery Press. The following year he took early retirement from the Bank of Ireland where he was an assistant manager.

His poem, Heron won the 1989 Guardian and World Wildlife Fund poetry competition when Ted Hughes was judge. His work has also featured in publications such as The Spectator and The Irish Times. In the 1970s he won The Irish Times/Yeats Summer School prize.

This summer a festschrift honouring the man and his poetry was published by Professor Donna L Potts from Washington State University. The poet Moya Cannon, who was one of many writers to contribute to the publication, said she first read Harvey’s poetry as a student in Dublin in 1978.

“Here was a poet who made your hair stand on end,” she said. “Such independence; he caters to no school, he caters to no literary fashion. He writes about the quotidian but lifts it into the metaphysical all the time; yet he is also completely grounded.”

In September Lyric FM ran an hour-long piece on Harvey put together by documentary-maker Eamon Little,

Reviewing his Collected Poems in this newspaper the poet Eamon Grennan wrote, “The poems of Francis Harvey lodge us deep inside a rural (south Donegal) landscape, the overlapping emotional and physical maps of which Harvey knows with startling, at times corrosive, intimacy. In the rinsed light of his minute observations a world is brought to vivid life, animated by compassion, understanding, and a tough grace of observation.”

Mr Harvey, and his wife of 59 years Agnes, were great friends of Brendan and Beatrice Behan. Mr Harvey wrote in his poem, Brendan in Donegal that he came to the county on “tidal waves of talk” and that in the county he “could forget the malice of cities”.

He is survived his wife, Agnes, daughters Attracta, Esther, Danea, Pauline and Joan, sons-in-law and grandchildren.

His funeral Mass is taking place on Monday at 11am at St Patrick’s Church in Donegal Town, with burial afterwards at the convent graveyard in Enniskillen. House private.

Have arts and culture been demoted again?

Patrick Freyne: You endearingly sentimental sociopath, I’ve just the show for you!
7