Doctorin’ the tower: KLF maverick in a small Antrim town

Bill Drummond, who once burned £1m as half of the KLF, is behind a left-field endeavour at Curfew Tower in Cushendall 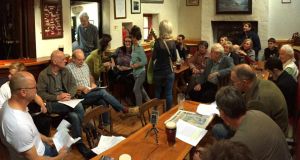 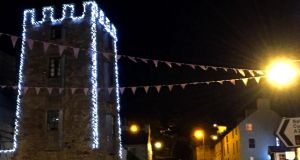 Sunset in Cushendall, Co Antrim, and people gather around a bonfire at the imposing, red sandstone Curfew Tower in anticipation of a very unusual literary event in a unique artistic residency.

Every August, during the Heart of the Glens festival, a prize of a bronze model of the 19th-century tower is awarded to a piece of art judged by the local community to be the best one produced during the year’s residency. The awards ceremony is overseen by the tower’s owner, Bill Drummond, a man famous for, among other things, burning an awful lot of money as the KLF and making a novelty record, Doctorin’ the Tardis, that sold more than a million copies.

The Curfew Tower residency started quite by accident in 1995, when Drummond, having left the music business, was looking for a building to house a book he was working on, Bad Wisdom. Only one copy of the book would be made, bound in reindeer skin and designed to last a thousand years. Like a modern-day Book of Kells, interested parties would have to travel to the tower to view it.

Glenn Patterson, the author and screenwriter who co-curated last year’s residencies at the tower, takes up the story. “The tower had its origin in Bill’s idea that, in the age of the internet, the physical object of the book might disappear, and perhaps what you need to do is you create a big book and you put it in a big tower.”

In the event, Penguin ended up publishing Bad Wisdom instead, and Drummond found another use for the tower. Hence tonight’s awards ceremony, this year honouring a body rather than an individual: the Seamus Heaney Centre for Poetry in Belfast.

Patterson, on behalf of the Heaney centre, brought poets and novelists to Cushendall rather than the more usual visual artists. A new book, The Curfew Tower is Many Things, contains some of the work produced there during 2014, as well as Drummond’s moving tribute to Heaney, with whom he collaborated on a poetry workshop for schoolchildren from Bristol.

The book’s elegant, minimalist design is a tribute to what Patterson describes as “Bill’s steadfast desire to preserve the importance of the book at a time when words have become ephemeral things”.

Among the writers present is Anne Devlin, who vividly remembers arriving in the village to take up her residency in the dead of winter. She found herself completely cut off from the outside world for the duration of her stay. With no wifi and an intermittent phone signal, pen and ink were her only companions. She refers to it as “a detox by isolation”.

She wrote continually, only stopping to visit the local cafe, where she was filled in on her host’s history. “Practically everybody said to me at one time or another, ‘The man that owns the tower now, he burned up a big amount of money in a fire’ ”, she says.

It was the first she had heard of it, but the occasion in 1994 when Drummond, together with his partner in pop group the KLF, Jimmy Cauty, marked his exit from the music business by burning a million pounds, is notorious. For some, it’s the the past quarter-century’s most remarkable piece of performance art; for others, an unfathomable act of foolishness.

The impulse behind the money-burning seems to tie in with the dogged independence Drummond still displays. He refuses to apply for such things as government grants and arts council subsidies, even when he is assured that his work qualifies.

“I suppose once you accept those things, you can begin to depend on them, and then they can be taken away from you, as is happening all over the UK at the moment,” says Devlin. It makes a peculiar sort of sense.

Patterson says, “We didn’t start out in this line of work to fill out forms for funding, but that’s what your life ends up being eaten up by. Bill’s taken a principled stand against public subvention. It’s great when somebody can do that, but of course it’s not always possible.”

The tower becomes part of the festival every year. This year Drummond associate Tracey Moberly has recorded Cushendall locals as they read excerpts from  The Curfew Tower Is Many Things in a tiny room that was originally the tower’s dungeon. A reciprocal event, to be organised by the Heaney centre in Belfast later this year, will reunite the Cushendall residents in a performance based around these recordings.

The tower’s 2015 residencies feature artists from further afield. Israeli curator Sagit Mezamer has been placed in charge in what has been, for some, a controversial decision. It’s one that rubs up against one of the most basic alliances in northern politics, where republican areas such as Cushendall tend to sympathise with the Palestinian Territories while loyalist areas tend to line up with Israel. It’s a move that is typical of Drummond, who often seems uncomfortable when surrounded by people who agree with him.

However, Mezamer sees many correspondences between Northern Ireland and Israel. “For the Israeli artists who come to Cushendall, it’s like getting into a time machine. It’s a perspective of how a solution might look, 20 or 50 or 100 years from now, in Palestine/Israel.

“It’s been educational too, I think, for the community to discover that there are Israeli conflicts other than Palestinian/Israeli. There are Sephardic Jews, east European Jews, Jews who have left Israel behind for moral reasons and who refuse to live or work in Israel – in fact I think about half the artists who have been in the tower this year live outside Israel.”

Artist Yonatan Levy staged a performance in a local pub recently, a reading from Ulysses. Levy played Bloom, Drummond was The Citizen, and locals read other parts. “If this residency was in Belfast it would be different,” says Mezamer. “Cushendall is a village. There’s much in common between the Israelis who have been here and the Irish; they communicate very easily, the community is very open and welcoming.”

The residency in Cushendall has been life-changing in other ways. “Life always surprises you and, parallel to this professional involvement, my emotional life changed via the tower when I met Raymond Watson, who formerly was involved in conflict. Now he’s an artist, and he has since gone through many difficulties to visit me in Israel.”

This has inspired Mezamer’s overall title for the 2015 residency, There Are No Borders with Love and Drugs. “If someone – as people I know have done – can cross into Gaza through the tunnels to get drugs, and if Raymond, a former IRA member, can get into Israel to visit me, out of love, then there are no borders.”

The tower will continue to break down borders, with residencies planned for a group of Palestinian artists. “We are planning to introduce the tower to curators from Ramallah and east Jerusalem. Even if only 12 Palestinian artists come, it will be important.”

“The tower feels like an ongoing work of Bill’s,” says Mezamer. “It’s something in the energy of the building. Without a phone signal or internet, you feel very awake; you put your energy in this place. When you stay in the tower it’s like being in the longest performance of your life, an ongoing performance within the history of the tower.”