Deadline 2037: the making of the next Oxford English Dictionary

New chief editor Michael Proffitt is preparing the third edition of the venerable dictionary, expected in about 23 years’ time. How is the organisation coping with the information overload of the digital age? 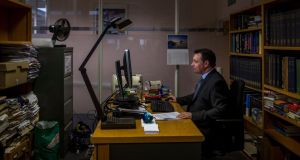 To compile a dictionary of nearly every word in the English language was an endeavour typical of Victorian times, complete with white-bearded gentlemen, utter confidence and an endearingly plodding pace. After a quarter-century, the first instalment emerged in 1884. Its contents? “A to Ant.”

In our own impatient age, the Oxford English Dictionary is being touch-typed towards a third edition, with 619,000 words defined so far, online updates every three months and a perma-gush of digital data to sort through. Grey beards are scarce today at its open-plan office, just earnest editors frowning at flat screens, occasionally whispering to their neighbours. For all the words here, few are spoken aloud.

This hush aside, change is afoot at the OED. For the first time in 20 years, the venerable dictionary has a new chief editor, Michael Proffitt. He assumes the responsibility of retaining the vaunted traditions while ensuring relevance in an era of Googled definitions and text talk.

Proffitt (48), neat in suit and tie, has defined, researched and managed for the OED since 1989. He is respectful of the old ways but equally ready to reconsider the dictionary, characterising it less as the heavy volumes of yore than as a trove of invaluable data.

“My idea about dictionaries is that, in a way, their time has come,” he says. “People need filters much more than they did in the past. As much as I adhere to the OED’s public reputation, I want proof that it is of value to people in terms of practical use.”

Proffitt advocates links in digitised literature to OED entries; he wants more use by students, whose distinction between “dictionary” and “web search” is increasingly blurred; he is also willing to license OED data to other companies. The OED has stood apart, partly for authoritative definitions but chiefly for its unmatched historical quotations, which trace usage through time.

The first edition, proposed in 1858 with completion expected in 10 years, was only finished 70 years later, in 1928. The second edition came out in 1989, at a length of 21,730 pages. Work on the third started in 1994, with hope of completion in 2005. That was off slightly – by about 32 years, according to the current guess of 2037. For all the admirable rigour of the OED, however, nowadays the dictionary is probably more revered than used. Part of the problem is price.

A copy of the 20-volume second edition costs about €730, with a one-year digital subscription running at €215 – a hard sell when so many research tools are free online. (Oxford University Press does offer a less extensive cousin of the OED for nothing online, under the confusingly similar title Oxford Dictionaries.)

The OED has yet to capitalise fully on its potential online audience. Proffitt is eager to do so, perhaps with lower prices, certainly with tweaks to the website and less stuffy definitions.

“A lot of the first principles of the OED stand firm, but how it manifests has to change, and how it reaches people has to change,” says Proffitt, who speaks with a faint Scottish accent and has a lexicographer’s habit of qualifying his speech with subheadings, historical references and alternate meanings.

However, he is hardly the tweedy scholar of old, referring with satisfaction to having drafted the entry for “phat” (“a. Of a person, esp. a woman: sexy, attractive. b. Esp. of music: excellent, admirable; fashionable, ‘cool’.”).

Language and literature
Raised in Edinburgh, Proffitt moved south to attend the University of Oxford, where he studied English language and literature. After graduation, he floated from job to job for a spell, then spotted a newspaper ad: the OED was hiring. The editors who grilled him in his job interview later confessed that they had not expected him to stay long. “But it drew me in,” Proffitt says 25 years later.

For all the tech talk, certain analogue ways linger, notably in the Quotes Room, a repository of word citations on little slips of paper. Many of these were mailed in decades ago by volunteers around the world, the most prolific of whom are identified by their distinctive handwriting and referred to fondly by editors: “That’s a Laski,” or “This one’s from Collier in Australia.”

In the 19th century, the primary obstacle to composing this envisaged dictionary of “every word occurring in the literature of the language it professes to illustrate” was tracking down suitable quotations, hidden as they were in myriad dusty tomes. Today, the editorial staff of about 70 people – with access to extensive digital archives – contends with the opposite problem: too much information.

“We can hear everything that’s going on in the world of English for the last 500 years, and it’s deafening,” says associate editor Peter Gilliver, who once spent nine months revising definitions for the word “run” – the longest single entry in the OED.

Literary texts accounted for most quotations in the early days of the dictionary. The current text, however, is far more inclusive, with blog and Twitter postings, quotations from gravestones and an inscription in a school yearbook. The objective is to find the earliest and most illustrative uses of a word, not to grant benediction to anything as “proper English”.

Each time commentators rebuke the OED for admitting teenage slang or marketing jargon, they misunderstand the dictionary, which aims not to define how language should be used, only how it is.

This prompts a question: if the dictionary merely describes what exists, then why not include every word? When the OED needed to fit into printed volumes, that notion was fantasy. Now, when there is doubt that the third edition will ever appear in print, why not use digital space to accommodate everything?

says the OED lacks resources to transform itself in this way. Instead, he advocates a federation of reference works. “The superdictionary may be, in fact, superdictionaries,” he adds. “What you want is some kind of search that then sends you to the right place.”

In taking charge of the most esteemed record of the most global language, Proffitt may face criticism however he acts. Some will complain if he brings change, others if he resists it, but years of working with words – meanings shifting, enlarging, vanishing altogether, joined by new coinages – offer a particular perspective.

“It makes you, broadly speaking, more tolerant or calmer or placid,” he says, hastening to add: “I don’t know whether those words are appropriate, but seeing the historical context often persuades you that what seemed like a hard-and-fast rule is not. And, similarly to the way the language changes, its uses change. The more flexible that people are about language use, then probably the more they thrive.”
– (New York Times service)

Traditionalists lament the decline of the English language, but historical quotations in the Oxford English Dictionary show that many infamous terms of today are older than expected.

1 OMG The first recorded appearance of this breathless acronym for
“Oh my God” comes, surprisingly, in a letter to Winston Churchill in 1917.

2 Literally Word curmudgeons wince when “literally” is used figuratively. Examples of this inversion go back to 1769. Even Mark Twain did it.

5 Whatever The earliest record of this fashionable retort may not go back centuries. Still, 41 years is older than many of its expert practitioners.