On a stormy winter day, President Michael D Higgins led us into the haven of poetry 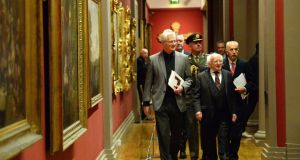 President Higgins is escorted by Sean Rainbird, director of the National Gallery of Ireland, and the Italian ambassador, Giovanni Adorni Braccesi, to the reading. Photograph: Cyril Byrne

It was one of those events where you sensed a greater than usual interest in the announcement about the location of the emergency exits.

All-day poetry readings can have that effect at the best of times. But the prospect of the President, Michael D Higgins, leading us on a several-hour-long descent into hell – even a metaphorical hell – was not for the faint-hearted.

On the other hand, it was a wet, windswept, gloomy November Saturday, and the lecture theatre of the National Gallery was a warm haven from the storm.

Besides which, like many things, even Dante’s Inferno is not so bad once you’re in.

So, having abandoned all hope (of improved weather) and entered there, a near full-house happily surrendered to at least some of the multilingual readathon begun by the first citizen.

The road to hell was paved with Irish, thanks to the 20th-century scholar Msgr Pádraig de Brún, through whose translation President Higgins led us into the dark wood of error, where the great poem starts.

There, with Dante, he survived the attentions of the “leopard of malice and fraud”, the “lion of violence and ambition”, and the “she-wolf of incontinence”, before being rescued by the poet Virgil, who conducts the tour.

Most participants settled for merely reading their allocated segments, but not the President’s wife, Sabina Coyne Higgins. She was responsible for Canto VI, by which point Dante was well into hell – the third circle, populated by gluttons.

In a performance worthy of the Abbey, the first lady seemed to be choking back tears as she described the plight of the wretches condemned to an eternity of “hateful rain, cold and leaden / changeless in its monotony”.

It sounded a bit like the latest Met Éireann forecast. So it was apt that among the other readers on Saturday were the gallery’s director, Sean Rainbird, writers Marian Keyes and John Banville, and the apostolic nuncio, Archbishop Charles J Brown.

The occasion was inspired by this year’s 750th anniversary of Dante’s birth. Saturday’s marathon was just the first of three such events, continuing into next month.

The Friends of the National Gallery having presented Inferno, the honour of hosting Purgatorio will fall to University College Cork, this coming Friday.

But, perhaps to the chagrin of some Cork people, Paradiso will be set in Dublin, on December 11th, in the chapel of Trinity College.