Dance extravaganza gets in step with ‘Ireland of today’ 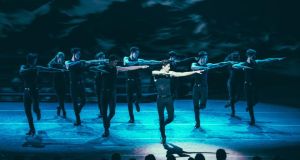 A scene from Heartbeat of Home, the electrifying new music and dance spectacular from the producers of Riverdance.

At the Bord Gáis Energy Theatre punters gather to see if Riverdance team John McColgan and Moya Doherty can do it again – reboot Irish identity for another era – with their new dance extravaganza, Heartbeat of Home.

Could it happen again? I ask the assembled wise men and women of the damp red carpet (incidentally, the theatre has at least two red carpets). These include, Sean O’Rourke and Pat Kenny (fight!); Joe Duffy, Fr Brian D’Arcy and Linda Martin.

Shay Healy, who saw the previews, says to prepare for “the best dancing they’ve ever seen on the Irish stage from an international cast of dancers”. Mike Murphy, a friend of Doherty and McColgan (“two of the most courageous people I know”), says the duo had “created a new genre”.

Brendan Courtney once worked for their Tyrone Productions and finds himself being buffeted by old memories. “Loads of people I knew then still work there, which speaks very well of them.”

Harry Crosbie anticipates that the show will “put Ireland on the world stage again in a very glamorous way”.

‘World on stage’
Earlier at rehearsal McColgan and Doherty walk the multicultural 38-strong cast (not in costume and looking like the kids from Fame in their casual dance gear) through a rehearsed final bow. “It really is like all the world’s on stage,” marvels Doherty, looking up at them.

She is reluctant to talk about Heartbeat of Home in the context of Riverdance. “Riverdance came out of public service broadcasting, it came out of Eurovision, it came out of left of field and took all of us by surprise,” she says. “It wasn’t an organic theatre experience, it was a cultural moment in time.”

Heartbeat of Home comes out of Ireland now, she says.

Several years ago McColgan lured novelist Joe O’Connor on board as lyricist with talk of a musical melting pot, Ireland’s place in the wider world, “and blending Irish music with Latin American and African music . . . I was captivated by the idea,” O’Connor says.

Now, after a couple of years’ collaborating with composer Brian Byrne and choreographer David Bolger, the show is ready.

“We’re attempting, without overstating it, to reflect the Ireland of today,” says McColgan. “There’s the pain of emigration, the emigrant’s lament. The first part [of the show] is people going away. Then in the second act there’s this melding of cultures in the new world. We try to be uplifting and optimistic but recognising the pain of the last five years.”

Dancing with hurleys
Over the course of the night Irish dancing melds with tango and flamenco. Broadway ballads merge with traditional music and jazz and live dancers emerge from filmic backdrops. There are, of course, familiarly martial rows of Irish dancers. And at one point men dance with hurleys (usually that’s a sign things are getting rowdy, at least in my house). Soon these hurley-wielding dancers will be advancing on theatres in China, Canada and the US.

“There’s a lot riding on [tonight],” says McColgan, sounding unflappably calm. “Twenty promoters from around the world [are coming], all the Irish VIPs and reviewers, parents are flying in from New Zealand and Australia. ”

For the premiere he and Doherty sit down the back near the sound desk. “Where no one can see us,” he says. Afterwards, the dancers will soak their feet in ice. “And some of us might put our heads in ice,” says Doherty and laughs.

TV Guide: 24 of the best TV shows to watch this week
9