Position was neither advertised nor tendered 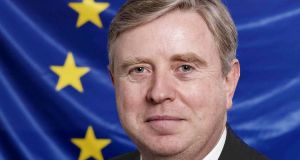 Patricia Ryan previously worked for Pat Cox, who is chairman of the board of Limerick City of Culture 2014, when he was in the European Parliament.

A former mayor of Limerick has heavily criticised the process around the appointment of Pat Cox’s former special adviser as the chief executive of Limerick City of Culture 2014.

Patricia Ryan previously worked for Mr Cox, who is chairman of the board, when he was in the European Parliament. Ms Ryan, from Limerick has also worked as special adviser to Mary Harney when she was minister for health.

Last January, six months after Limerick was announced as national City of Culture 2014, former European Parliament president and freeman of Limerick Pat Cox was announced as chairman of the board. In May, London-born Karl Wallace was appointed artistic director after an open tender and interview process.

The chief executive’s position was not advertised or tendered and the appointment process is to be raised at meetings of Limerick city and county councils today.

“I think politics has a bad enough name as it is and anybody who is appointed to anything with a salary involved should have to do so by open tender,” said Independent councillor John Gilligan. “It should be open and everyone should have a right to apply for it.

“Having said that, I believe had it gone that way Ms Ryan would have got the job anyway, because she has demonstrated before now that she is very good in that field. However this [her appointment] is not the issue.”

The manager of Limerick City and County Council, Conn Murray, has defended Ms Ryan’s appointment and said a suggestion that she would be earning about €170,000 a year bore “no resemblance to what the agreed salary is likely to be.”

It is believed there will full disclosure of the chief executive’s salary when it is finalised in the coming weeks. Since the beginning of the year she has been advising the board on an ad hoc basis and her consultancy fees are estimated at about €700 a day.

While the position was not advertised either externally or internally, Mr Murray said he “personally identified a number of potential candidates”, including Ms Ryan, and engaged with them in confidence.

“A number of those candidates were not available and Patricia, who had already shown her capabilities from earlier in the year through her role as an adviser to the board of City of Culture, was the outstanding candidate. I recommended her appointment to the board, which it accepted.”

Mr Cox has not commented on the appointment and sources say he had nothing to do with Ms Ryan’s appointment.

The books quiz: Who adapted his own crime novel for a BBC TV series?
9