Statues of two naked men may be only surviving bronzes by Italian master, experts say 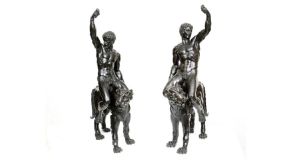 A team of experts led by the University of Cambridge and Fitzwilliam Museum has gathered compelling evidence that argues that two bronze statues, which have spent over a century in relative obscurity, are early works by Michelangelo. Photograph: Chris Radburn/PA Wire

Two bronze sculptures which had languished in obscurity for more than a century may be the work of Michelangelo, researchers have revealed.

It has long been thought that no bronzes by the Italian master had survived but a team of international experts has gathered evidence to suggest the hidden masterpieces are indeed early works by Michelangelo — made shortly after he completed the marble David and as he was about to embark on the Sistine Chapel ceiling.

Naked, muscular and riding triumphantly on two ferocious panthers, the pair were identified from a tiny detail in a 500-year-old drawing.

If the attribution is correct, they are the only surviving Michelangelo bronzes in the world.

Dr Victoria Avery is keeper of the applied arts department of the Fitzwilliam Museum, Cambridge, where the sculptures will go on display.

She said: “It has been fantastically exciting to have been able to participate in this ground-breaking project, which has involved input from many art historians in the UK, Europe and the States, and to draw on evidence from conservation scientists and anatomists.

“The bronzes are exceptionally powerful and compelling works of art that deserve close-up study — we hope the public will come and examine them for themselves and engage with this ongoing debate.”

A team of international experts led by the University of Cambridge and Fitzwilliam Museum claimed they have gathered compelling evidence of the non-matching pair’s provenance.

One figure is older and lithe, the other young and athletic.

Long admired for the beauty of their anatomy and powerful expressions, their first recorded attribution was to Michelangelo when they appeared in the collection of Adolphe de Rothschild in the 19th century.

But since they are undocumented and unsigned, this attribution was dismissed and over the last 120 years, the bronzes have been attributed to various other talented sculptors.

That changed last autumn when Paul Joannides, emeritus professor of art history at the University of Cambridge, connected them to a drawing by one of Michelangelo’s apprentices now in the Musee Fabre, Montpellier, France.

A Sheet of studies with Virgin embracing Infant Jesus, c1508, is a student’s faithful copy of various slightly earlier lost sketches by Michelangelo.

In one corner is a composition of a muscular youth riding a panther, which is very similar in pose to the bronzes, and drawn in the abrupt, forceful manner that Michelangelo employed in designs for sculpture.

This suggests that Michelangelo was working up this very unusual theme for a work in three dimensions, the researchers claim.

The bronzes were compared with other works by Michelangelo and found to be very similar in style and anatomy to his works of 1500-1510; a date confirmed by the preliminary conclusions of initial scientific analysis.

Using X-ray, the team established the cast were thick walled and heavy — an indication that they date to the late 15th or early 16th century.

Research is continuing and the final conclusion will be presented in July.

The bronzes will be on display at the Fitzwilliam until August 9.