Word for Word: The difficulty of finding time to read 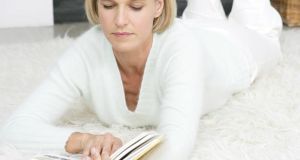 A mere glance at Arminta Wallace’s list of books to watch out for this year, in these pages on December 28th, had me salivating and despairing in equal measure. Although it was full of titles that had me nodding in excitement, I have so much to catch up with in the meantime.

I make no apology for revisiting last year’s new year’s resolutions in this column, on the grounds that, like most people, I have failed. For a brief period I could step out of my bed without falling over a pile of books, but, alas, that day is gone, and I must begin the clearances again. Fail again perhaps, but fail better.

As for the making- time-to-read resolution, that bit the dust too. In the semi-idle days of Christmas I mulled over this one and did some mental arithmetic. I had difficulty deciding how long it takes to read an average novel but settled on seven hours, which in my case is a conservative estimate even for a short book, as reading is the only thing in my life I do slowly. I console myself with the belief that it does the writers justice.

Were I to read a book for just one hour every day, 365 days a year, that would allow me to read a book a week. The bar could be raised by another six or so books to allow for holiday reading. Fifty-eight books a year might not be much to some people, but it would be a good start.

I must find additional time for reading daily papers, magazines, literary journals and all the other material I am used to perusing, not to men- tion Twitter and Facebook and the jewels (and dross) with which they tempt me.

In one respect only do I envy those with a long commute: they are granted extra reading time. Carving out this time is the challenge, and only by dedicating a minimum of an hour a day to reading a book can it be overcome. Combining it with the daily 30-minute walk by using an audiobook might kill two resolutions with the one stone, but then there’d be no time to listen to podcasts or music.

I am lost in admiration for those people I know who app- ear to have read every book published last year. Some of them must read a book a day. I will settle for a book a week.

The Mystery of Charles Dickens: A strange life led in the public eye
5