A treasure trove of contemporary art, although the steep price may limit appeal 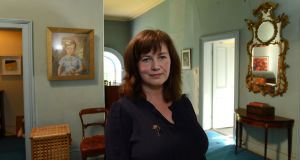 Selina Guinness author of ‘The Crocodile’ by the door at her home in Tibradden, Rathfarnham, Co Dublin. Photograph: Cyril Byrne

As ever, this year’s Winter Papers, published by Curlew Editions, is a handsome volume: well-produced, varied, and timely. Moving between photography, visual arts, music, poetry, short fiction, essays, interviews and even a fascinating note on historical biography (John Gallagher’s A German Princess), it is a treasure trove of contemporary Irish art, though its rather steep price (€40) is likely to limit its appeal.

Heredity, history, religious identity, lineage and parenthood are all recurring themes, and find voice through various forms. One thing to note is that, as a snapshot on contemporary Irish art, the anthology is glaringly white (in fact, by my count, it is 100 per cent white), and we must ask how daring or original any anthology can be if its experiments and voices are filtered solely through the white experience. This seems to be an unnecessary curtailing of scope, and, coupled with the high price of the volume, gives an unattractive impression of exclusivity.

The anthology begins with a short story by Elske Rahill, Inheritance. In this year of the referendum on the Eighth Amendment, it is surely pointed that the editors chose to open Winter Papers 4 with such a striking imagination of the experience of pregnancy. It is interesting, too, to note Rahill continuing the prevalence across fiction this year for reworkings of classical literature: Daisy Johnson’s Booker-shortlisted Everything Under was a complex look at Oedipus, and Madeleine Miller returned to form with her novel Circe. There is perhaps something about the archetypal women of Greek myth – entrapped in a deeply patriarchal society – that now seems ripe for reassessment and exploration. As the speaker of Rahill’s story suggests, “Perhaps we can claw our way back through that story.”

Inheritance opens with a vivid description of morning sickness (“Neon-yellow heaves up from my gallbladder, blossoms garishly on the duck-egg pillowcase”) as a woman tries to gather her thoughts on the female figures of Attic tragedy. This story is quite difficult to untangle: it frames its five sections with quotations from critical theory, and pits these up against jotted notes on Greek drama which link in often-unspoken ways with the speaker’s mindset. However, Rahill’s clever weaving of Greek ideas of the body, taboo, and confused desire in the “Little Oedipus” section of the story is daring and well-pitched.

The interviews and craft-talks in this year’s Winter Papers are particularly good. Peter Murphy talks to producer and DJ John Lillis (aka mynameisjOhn) and Aaron Hayes (aka Hazey Haze) in the middle of the oldest standing stone circle in western Europe. With Hazet giving a taste of his rap through a piece called A Beauty Named Shannon, which journeys into Limerick’s suicide-cluster legacy, the interview captures a beautiful moment of modern Ireland speaking back both against, and in eerie harmony with, its history.

Elsewhere, in a conversation between the poets Leontia Flynn and Doireann Ní Ghríofa, the mysteries of inspiration, craft and the creative impulse are held up to the light in a refreshing and unpretentious manner. Both poets come up with beautiful formulations for often unpindownable things. Asked whether creative writing can be “taught”, Flynn replies “You cannot teach somebody to be struck by lightning”, but you can teach them craft, “so that when the lightning does strike, we hope that it’ll meet with receptiveness.”

In a four-part poem sequence, Maude, Enthralled, Ní Ghríofa leans in to listen and observe the Cork marine biologist Maude Delap (1866-1953): “Maude knows the etymology of captivate,/ how it holds both charm and a cage.” Echoing nicely with a later conversation between artists Rosie O’Reilly and Yvette Monahan regarding octopuses and consciousness, Ní Ghríofa’s sequence probes a wondrous connection with the sea. In the beautiful, held-breath final poem, Night, the figure of Maude waking in the night and going down into her lab is one of quiet wonder, riffing gently on the aural reverences of Maude’s name: “awed”, “enthralled”. It is poems like this that make a reader long for more verse in this year’s Winter Papers, which is otherwise prose-heavy.

Selina Guinness’s fascinating six-part essay, Is It Still the Same? - Fictions of Home, explores the ways in which her home’s use as a filming location over the years might have altered the space, both historically and emotionally. A place “on the fraying hem of grandeur”, Tibradden is a house where the writer sees actors performing fictions which intersect in sometimes uncomfortable, and other times miraculous, ways with her home: “The blonde daughter, pale beneath her freckles before this ever began, is hustled out of my son’s bedroom by a balaclavaed man.”

One of the stand-out pieces of the anthology is Jan Carson’s searching, funny and heartbreaking essay No Dancing. Exploring the religio-cultural taboo on dancing in her strict Presbyterian upbringing, Carson tenderly and cleverly unpicks spirituality from dogma. Her discovery of art, and of herself as an artist, is subtly interwoven with a deep religious sensibility: “I am not a writer in spite of my faith – I write in, and through, and ultimately, because of it.” Later, Aiden O’Reilly is more heavy-handed in discussing similar themes, and one feels that his essay does not bear well with comparison with Carson’s.

As with many of the best pieces in Winter Papers, No Dancing is both affirming and questioning, personal but also consciously reaching beyond its bounds. Alive to transcendence and mystery, and steadfastly refusing to see either as frail or flighty, Carson documents how she “fell in love with the unknown in art” in a way that replicates and mirrors the sense of the numinous in her religious experience. Winter Papers, bright with that eloquence, leaves us with plenty to consider through the dark nights ahead.