Brian Cathcart captures the drama of an era when momentous news travelled by rowing boat, not by smartphone 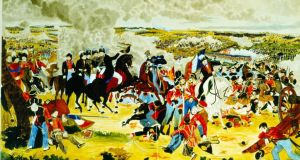 At 10am on June 21st, 1815 Major Henry Percy was frantic. A dashing and eager aide-de-camp to the Duke of Wellington, he had witnessed Bonaparte’s final defeat at Waterloo three days earlier and now he was charged with carrying the official dispatch announcing the victory to London. But everything was going wrong.

First he had been slow getting away from Brussels. Then the road to the coast had been choked with traffic, fresh horses had been hard to find and every few miles he had been forced to stop and tell the story of the victory. Having taken nearly 24 hours to reach Ostend he had then put to sea in a fast naval ship, only to find that there was no wind.

So here he was, carrying the most momentous news of the century, and for the past 20 hours he had been drifting helplessly on the North Sea currents.

And London, waiting for the news, was no less frantic. One wild report of a victory, soon exposed as a hopelessly exaggerated account of a preliminary encounter, had set nerves jangling. Now most people refused to believe any unofficial story and the streets were thronged with Londoners desperate to see the Duke’s messenger arrive.

The Wednesday morning papers came and went. The afternoon papers appeared in successive editions, hour after hour. Rumours and reports abounded, but still there was nothing from the Duke, nothing that could be relied upon. What could have happened? Was he defeated and on the run? Was he dead?

Out at sea Percy’s patience had snapped when the call came down from the rigging that the Kent coast was in sight. He could no longer endure the drifting. A small boat was lowered, four stout sailors embarked and Percy followed with his dispatch and the duke’s war trophies – two captured French eagles, or military standards. Then they rowed for it.

Viewed from a distance of 200 years, from an age when your smartphone will buzz in your pocket almost instantly if something happens on the far side of the planet, the tribulations of the news of Waterloo are almost incomprehensible. Should we laugh? Should we pity the poor, helpless folk of Regency England? How on earth did they bear it?

Not only was Waterloo momentous news, but it was the last great piece of news to be communicated without help from steam power or electricity. Small steam ships were already afloat in 1815, and very soon a young Londoner called Francis Ronalds would begin experiments on an electric telegraph, but such novelties were not available to hurry the Waterloo dispatch on its way. Instead, it was down to four men pulling at oars in the open sea.

They made it, and there followed a breakneck drive by post-chaise and four from the coast (at times possibly surpassing 10 miles per hour!). Meanwhile in Regency London the social season was at its height, the theatres were full to bursting and in the elegant Georgian squares there were parties and dinners aplenty. Everywhere, one subject dominated.

Nowhere more so than at 44 Grosvenor Square, where by chance ministers were having their monthly dinner. Their mood could scarcely have been tenser. As one account put it:

“They dined, they sat. No dispatch came. At length, when the night was far advanced, they broke up. Yet, delayed by a lingering hope that the expected messenger might appear, they stood awhile in a knot conversing on the pavement when suddenly was heard a faint and distant shout. It was the shout of victory! Hurrah! Escorted by a running and vociferous multitude, the Major drove up. He was taken into the house and the dispatch was opened.”

Percy had crossed Westminster Bridge into town a little after 11pm and was directed to Grosvenor Square from Downing Street. But exhausted as he was, his mission was not over. Once the Cabinet was satisfied of the victory he drove on to St James’s Square with a cortege of ministers and jubilant citizens in his wake, there to inform the Prince Regent.

The Prince was attending dinner with friends, and there was to be dancing. The well-groomed, well-mannered couples were in their places for the first quadrille when in burst the tall, dark and handsome major, his scarlet uniform stained with the mud and blood of battle. In his hands were the two gilt eagles on 10ft poles decked with French tricolours, also stained with blood. Through the stunned dancers he pushed, and up to the dais, where, laying the eagles at the Prince Regent’s feet, he announced: “Victory, sir! Victory!” No novelist or dramatist could have contrived it better.

This story of the news from Waterloo, whose bicentenary is marked this year, can appear impossibly remote. Less than 350km separate the battlefield from London as the crow flies, and the dispatch travelled that distance at an average speed of less than 5km an hour – walking pace.

And technology alone, or a shortage of it, does not explain this. Why, we might ask, did Londoners have to wait for Percy to deliver the Duke’s carefully-crafted 16-page dispatch? Why were there no other suppliers of news capable of satisfying the population more rapidly?

In that year London alone could boast no fewer than 56 newspapers, yet not one of them had sent a reporter to Belgium to report the war, or had made special arrangements for the rapid transmission of news from the battlefront. A cultural gulf divides us from the news world of those days, as well as a technological one.

Then again, at least one thing is constant. As the behaviour of the crowds in the streets and the theatres shows – and the anxiety of the ministers at their monthly dinner – the people of Jane Austen’s time wanted and liked news just as much as we do. It was every bit as vital and as thrilling to them as it is to us.

Brian Cathcart’s The News From Waterloo was published on April 30th by Faber & Faber, priced £16.99. You can read more about it at thenewsfromwaterloo.com