Why H-Block hunger strikers were not force-fed 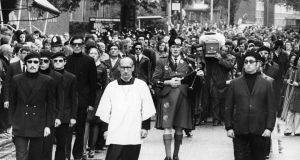 The coffin of IRA hunger striker Michael Gaughan leaves a church in Kilburn with an IRA escort on June 8th, 1974. His death after force feeding by prison doctors influenced the World Medical Association’s ethics committee to declare the practice unethical in 1975. Photo: Frank Barratt/Keystone/Getty Images 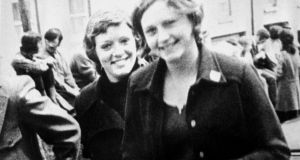 Dolours Price (left) and her sister Marian at a civil rights demonstration in Belfast in 1972. Their force feeding by prison doctors in England influenced the World Medical Association’s ethics committee to declare the practice unethical in 1975. Photograph: PA 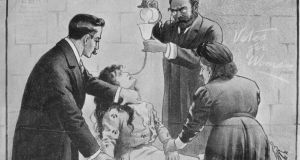 The suffragette hunger strike campaign (1909-14) introduced a new procedure into prison medical practice: force feeding. Force-feeding is an invasive procedure that involves inserting a stomach or nasal tube into the body against a prisoner’s wishes. It causes most prisoners to gag, choke and vomit over themselves. Despite this discomfort, force-feeding was the British government’s standard response to twentieth-century hunger strikes waged by suffragettes, Irish republicans, conscientious objectors, anarchists, anti-nuclear war campaigners as well as convict prisoners. The procedure went wrong on many occasions, causing deaths from heart problems and pneumonia when liquid accidentally poured into the lungs.

Since its introduction, force feeding raised a number of ethical questions. Is it really the same as “artificial feeding” (used to keep the comatose alive)? Are doctors saving lives or punishing rebellious prisoners? And do governments wrongfully coerce doctors into performing an unethical act during political crises? Historically, more conservative doctors supported force feeding. They saw saving lives as a basic medical duty. But considerable opposition also existed. Those who opposed the practice include political activists, concerned doctors, human rights campaigners, literary figures including Sean O’Casey and George Bernard Shaw, medical ethicists and prisoners themselves.

Why, then, were Bobby Sands and the other hunger strikers not force-fed? Force feeding had not been used in Ireland since 1917 after republican leader Thomas Ashe controversially died from the procedure’s effects. Force-feeding policies were not in place in Troubles-period Northern Ireland. Problems emerged in the mid-1970s when the IRA began to plant bombs on the British mainland. Those caught in Britain were likely to be imprisoned there. As the government had not amended its hunger strike management policies since their introduction in 1909, IRA prisoners were liable to being force-fed if they went on hunger strike. Which, of course, they did.

Jailed in 1973 for their role in the IRA London bombing campaign, Dolours and Marian Price went on hunger strike in a campaign to be repatriated to Northern Ireland. Doctors force-fed the sisters for much of their 200-day protest. The Prices’ relatively young age (19 and 23) fuelled public debate, as did the apparent excessiveness of force-feeding policies given that the sisters’ requests to be transferred home seemed fairly reasonable. In a pamphlet entitled Prison Writings of the Price Sisters (published in Andersonstown, a republican enclave of Belfast), one of the sisters wrote:

“It only takes a few minutes but it feels like an eternity. To crown matters, I was violently sick afterwards and brought everything up. I feel a wee bit better now but I am dreading going through it all again tomorrow. It’s only to be expected that after 19 days without food, my stomach would reject the ‘feed’.”

Between 1973 and 1974, the Price sisters’ feedings were discussed and heavily debated in the Guardian, Spectator¸ feminist magazine Spare Rib, New Statesman and New Society, as well as medical publications including the British Medical Journal. The Irish Press described force-feeding as “an experience much worse than rape”.

In May, British home secretary Roy Jenkins announced that the sisters were being unco-operative. In light of this, he had decided to stop feeding them. However, Jenkins was under presure from the IRA and concerned human rights activists. Doctors stated that the prison doctors had “finally had enough” of being ordered to perform an inhumane procedure. However, the Price family suggested that a doctor had almost accidentally killed one of the sisters during the process of feeding. As Albert Price lamented in one media interview, “the doctor can’t be that experienced. He put the tube in the wrong way.”

The Price sisters attracted public interest as the idea of two young women (or “girls” as the press termed them) aroused an emotional public response. However, a number of other prisoners were being force-fed at the time. Less than a fortnight after Jenkins decided to stop feeding the two sisters, Mayo-born IRA prisoner Michael Gaughan died from the effects of the procedure. Until then, his hunger strike had passed mostly unnoticed. Almost immediately, Jenkins granted a prison transfer to the Price sisters.

The medical profession came under closer scrutiny for having supported the use of a clearly dangerous procedure. The General Medical Council and British Medical Association issued careful statements that maintained that prison doctors had acted ethically. But, despite some degree of medical support for force-feeding, Jenkins announced on July 17th that mentally-sound hunger strikers would no longer be force-fed and that “health deterioration may be allowed to continue with medical intervention”. In other words, hunger strikers would be left to starve.

Events in British prisons ultimately had international consequences. In March 1975, the World Medical Association’s Ethics Committee met and decided that force-feeding was unethical after all. The association warned that doctors who ignored (what became known as) the Declaration of Tokyo could be found guilty of unethical practice. The association pledged to support doctors who felt pressured by government bodies. Some members of the Prison Medical Service stated that it was equally unethical to expect doctors to stand by and watch prisoners kill themselves. Suspicions were also raised that prison doctors sympathetic to the IRA might let prisoners die to help secure martyrdom.

These policy changes radically changed the dynamics of hunger striking. Hunger strikers now had free rein to claim control over their bodies without fear of being fed. The authority of prison doctors to discipline with their stomach tubes had been drastically cut. Even at the fraught peaks of the 1980-81 Long Kesh/Maze Prison hunger strikes, Margaret Thatcher’s government adhered to Jenkins’ and the World Medical Association’s decision that political hunger strikers should not be force-fed.

The problem for the government was that letting prisoners starve appeared just as horrific as assaulting them with a stomach tube. Perhaps lives could have been saved in Long Kesh/Maze Prison if the government had re-introduced force-feeding. But to do so would have entailed authorising doctors to perform a procedure formally deemed unethical.