Who’s reading YA? Everyone at DeptCon1, that’s who

Claire Hennessy reports on last weekend’s inaugural Irish YA convention, a fan event but one rich in debate and author insights 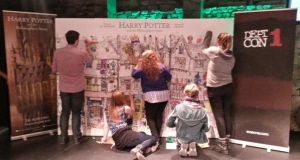 In a combination of fan appreciation and “mindful” colouring books, a giant Harry Potter illustration wall went from bare to beautiful over the course of the weekend

Recent Nielsen Book figures indicate that – in the United States, at any rate – 80 per cent of all Young Adult (YA) books are purchased by adults. This is up from 55 per cent in 2012, when it was also discovered that this wasn’t just a case of well-meaning parents or relatives purchasing books for the teens in their lives but adults often buying YA novels for themselves. While it’s clear that book sales aren’t the only indicator of who’s actually reading YA, and that “adult” buyers in their late teens perhaps need to be categorised separately from readers in their thirties and forties, the adult support of YA is both blessing (higher sales, more critical attention) and curse. Young adult fiction, like children’s fiction, has always been subject to adult intermediaries, sometimes referred to as “gatekeepers” – the booksellers, librarians, teachers, publishers and parents who make the majority of the decisions about what gets published for and marketed to teenagers.

The authors of YA are almost always adults themselves, too, writing about and speaking for a demographic they are not a part of. One of the most frequently asked questions for YA writers (aside from “Have you ever thought about writing a real book?”) is “How do you write convincingly about teenagers?” It was a question posed over and over again last weekend at Ireland’s inaugural YA convention, Dept Con 1. And it’s a question that can annoy writers, because, as Patrick Ness noted, “Every book is an imaginative leap.”

It is a writer’s job to imagine and to empathise – the word ‘empathy’ turned up in a number of panels. YA writers spoke about writing the emotional truth of being a young person, rather than frantically researching current slang or popular culture. (Though their own distance from their teenage years was noted – James Dawson recounted his own adolescence and then realised it was necessary to explain what exactly a “video shop” was. “Walking Netflix,” Derek Landy helpfully added.)

YA authors vary in their opinions about how to think about their readership. “I write to please myself,” Non Pratt declared, “and I still read like 14-year-old Non.” Sarah Crossan, who taught teenagers for several years, firmly believes it’s the duty of YA to offer up some kind of hope, even when addressing difficult issues and “brutal truths”. Patrick Ness argued that despite a growing adult readership, it’s a “cheat” if YA novels are not first and foremost aimed at a teenage audience, though the grown-ups are welcome to the party. He cited Stephenie Meyer’s Twilight series as books that he hated, but insisted: “They’re not for me. They were owned and claimed by teenagers.” But whether or not these authors think consciously about the teenage audience as they write, they absolutely take young people seriously and believe them capable of dealing with difficult topics. Sheena Wilkinson said, “I don’t think anything is taboo in YA fiction – it’s dealing with it responsibility that’s important.” Pratt pointed to the real world teenagers are living in: “If it can happen in reality, it can happen in fiction.”

The two-day convention at Smock Alley theatre was spearheaded by Eason’s David O’Callaghan and the rest of the team at Department 51, the bookshop’s department specialising in both YA books and popular culture. Although Ireland has seen plenty of children’s literature conferences, including both academic conferences and the annual Children’s Books Ireland, these are aimed at professionals first and foremost – critics, booksellers, librarians, teachers, authors. Some of these were in attendance at Dept Con, but there were also readers – ranging all the way from pre-teens accompanied by parents to older adults, with a significant number of 15- to 20-year-olds. Like – and to some extent modelled on – Comic Con events, this was first and foremost an occasion for fans. Panel discussions were followed up with signings, and the trending of #DeptCon1 on Twitter both days of the convention (Friday, October 23rd and Saturday, October 24th) was aided by photos of signed books and readers with their favourite authors. And in a combination of fan appreciation and “mindful” colouring books, a giant Harry Potter illustration wall went from bare to beautiful over the course of the weekend.

But an event for fans doesn’t imply a lack of critical thought about the field. Alongside appreciation for books, there was serious discussion about the issues in YA. One of the panels focused on the representation of LGBT characters in YA, with Cat Clarke reminding readers, “There’s a danger in thinking the job’s done. It’s not.” James Dawson, who has previously identified as a gay man and since come out as a transgender woman, noted that it’s still a scary process to “come out”, even with books and role models available for young people. It is a position of privilege not to have fear about who you are. Deirdre Sullivan concurred, pointing out the strangeness of coming out; as a straight woman, she said, “I never had to sit down with my mother sand say, this is the kind of sex I’d like to have.”

Feminism was also tackled in a “Death to the Patriarchy!” event, featuring Louise O’Neill and Holly Smale. While O’Neill is known for interrogating the horrors of patriarchal culture in her work, Smale’s Geek Girl books are what you might call “stealth feminist”: at first glance they seem like fluffy (a term we curiously only seem to apply to material aimed at women) reads about the world of modelling, but the strong female characters reflect Smale’s desire “to show that strength is not just a masculine quality.” Despite this, the first question she’s usually asked after giving talks is, “do you have a boyfriend?” O’Neill added that her variation on that question is, “are you afraid your books will scare away the men?” Although the younger audience members were comfortable with the label of feminist, they noted that others in their lives weren’t and asked: how can we overcome the stereotype of feminism as meaning “man-hating”? “The patriarchy,” Smale declared, “is not the same as men. We don’t hate men. We just hate the system that places men above us.”

Both sexuality and gender issues came up again in a panel exploring realism in YA, with Holly Bourne discussing how her books weren’t just about representing the world as is but about how you can change the world. Bourne’s latest project is a YA trilogy about a group of young feminists who call themselves the Spinster Club, and she commented on the dysfunctional way female sexuality is often treated in the world: “You’re either a whore or a prude – and you can’t even decide, it’s decided for you.” The horror panel also touched on the research into female protagonists in that genre: we believe female terror more, James Dawson noted.

For all the “issues” tackled, the one thing asked at almost every panel was this: what advice do you have for young writers? The best pearls of wisdom from Dept Con 1 can be found at the end of this article. In the meantime, behind the scenes, O’Callaghan and the rest of the team are still recovering from the hard work that went into making the first Irish YA convention a resounding success. “Two of the best days of my life,” Jacq Murphy notes, praising her colleague for his “labour of love”. “It was everything we’d hoped it would be,” O’Callaghan says. “The feedback we’ve been getting from everyone involved, including attendees, publishers and authors, has been immensely positive. But there’s no time to rest ... there’s a bigger and even better Dept Con 2 to start planning!”

In the words of this century’s greatest cheerleading movie: bring it on.

“Cut a sliver of your soul away and put it in your story.”

“Write a book you want to read yourself. You’d be amazed how many people don’t.”

Patrick Ness, author of The Rest Of Us Just Live Here

“You have to have a work ethic.”

Sally Green, author of the Half Bad trilogy, which will soon be adapted for film by Imaginarium

“You have to fall in love with what you write.”

“Get out into the world, eyes and ears open - be receptive.”

“As long as the characters are emotionally truthful, you can write anything.”

“Read, write and try to finish what you start. That determination makes you an author.”

“I write the best books I can write and hope they find a good home . . . and disturb people’s minds.”