Wherever the Firing Line Extends: Ireland and the Western Front review 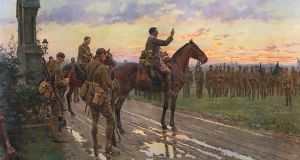 The Last General Absolution of the Munsters at Rue du Bois; painting by Fortunio Matania depicting an incident in France in May 1915, when the 2nd Battalion of the Royal Munster Fusiliers suffered very heavily at Rue du Bois, in the Pas de Calais. Photograph: Illustrated London News Ltd/Mary Evans

Book Title:
Wherever the Firing Line Extends. Ireland and the Western Front

“Site of memory” is what historians now call the places that symbolise key episodes in the past. Ronan McGreevy has written a vivid and endlessly informative study of Irish sites of memory of the Great War in France and Belgium, though in the case of nationalist Ireland they are really sites of non-memory. In each of his 22 chapters, McGreevy tells the tale of a different monument, and most will be unknown to most readers.

They range from humble plaques to major statements such as the Ulster Tower on the Somme or the Island of Ireland Peace Park in Belgium, with its striking round tower. Most date from the decade after the war but some are recent, such as the Peace Park or the monument near Ypres to the poet and nationalist Francis Ledwidge, in whom “all the strains criss-cross” as Seamus Heaney put it.

In fact, McGreevy tells two tales, one about the people commemorated and the other about the monuments themselves. So what do the monuments say about the Irish soldiers on the western front? From this angle, they fall into three clusters according to time and place.

The first cluster contains the most surprises. It represents the Irish soldiers already in the army or its reserves in 1914. They fought in the helter-skelter opening campaign from Mons in Belgium to the Marne and back until the front was formed, and then in the efforts to break the deadlock in 1915.

A plaque at Casteau in Belgium marks the first British shots of the war, fired by the “Mounted Micks” (or Royal Irish Dragoon Guards). Ironically, a plaque in nearby Mons to other Irish cavalry commemorates the end of the war. For British troops had reached the town again after four and a half years’ fighting on November 11th 1918, and it was the Irish who supplied the victory parade.

Most of these monuments testify to the place of the Irish in the small regular army that was virtually destroyed in the first part of the war. The officers included Catholics, such as Lt Maurice Dease, from a landed family in Westmeath and one of the first two winners of a Victoria Cross. A recent monument is that to the 2nd Munsters at the spot where they were immortalised receiving final absolution in the painting by an Italian artist, Fortunino Matania, before they were devastated at Aubers Ridge in May 1915.

A second cluster commemorates a very different kind of soldier, the wartime volunteer, who first saw mass action in the Battle of the Somme in 1916. This was a crucible of national mythmaking. In 1921 the Ulster Tower was the first monument completed on the western front because it memorialised the exploits of the unionist 36th (Ulster) Division on the opening day of the battle.

The comparable heroism of the nationalist 16th (Irish) Division at Guillemont in September, where Tom Kettle died, garnered only a modest granite Celtic cross. McGreevy demonstrates the ambiguities of the Free State towards the war by showing both that the cross attracted large crowds when it was displayed in College Green on Armistice Day 1924 but also that the government avoided any official role in its inauguration in France.

The monument to the Tyneside Irish, recruited among the descendants of post-famine emigrants to England’s industrial northeast and devastated at the Somme, reminds us that the diaspora provided fertile frameworks for recruitment and distinct sites of memory.

The third cluster of monuments marks the grim fighting in Belgium in 1917 at Messines and Ypres (Passchendaele), where Ledwidge died. Famously, the only time the 16th and 36th Divisions fought together was in June at Messines, displaying a comradeship that belied the discord deepening at home. When Willie Redmond, the 56-year-old MP and younger brother of John, was killed not long after making an impassioned speech in the Commons calling for a new start in Anglo-Irish relations, it signalled the last gasp of Home Rule Ireland.

McGreevy reconstructs the efforts to memorialise that moment in the preservation over the decades of Redmond’s lone-standing tomb in the face of efforts to relocate it to an official cemetery. Another Celtic cross marked the joint engagement of the two divisions.

The monuments can also be read from a different angle for what they tell us about memories of the Great War over time. The obvious contrast is that between the early and unwavering claims made on the war by a unionist Northern Ireland in need of foundation myths after partition and a Free State for which the Rising performed this function. Yet, lest we draw the contrast too sharply, McGreevy not only reminds us of the level of support for commemorating the soldiers’ sacrifice in Free State Ireland but also points out that the Ulster Tower fell into disrepair in the decades after the second World War. For all of Ireland, the Great War was pushed into the background by its successor and then by the conflict in the North.

The change came in the 1990s with the peace process and the new relationship of each part of the country with the other and of both with the past. In an excellent chapter, McGreevy shows us that the Island of Ireland Peace Park, inaugurated in 1998, the year of the Belfast Agreement, is a symptom of that transformation and also the last national monument to be erected by any country on the western front. As the memory changes, so new sites are created and old ones rediscovered. The great merit of McGreevy’s book is to demonstrate that process for Ireland’s Great War over the past century.