Where have all the men gone in publishing?

Suzanne Rindell set her novel, Three-Martini Lunch, in the New York publishing world in 1958 when sexism was rife. Today, women dominate the industry, except at the top 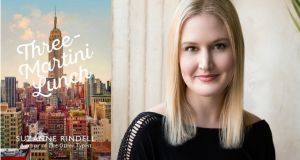 Suzanne Rindell: as publishing salaries have failed to keep pace with inflation and similar professions, it has become an industry dominated by women, yet a glass ceiling persists

In my novel, Three-Martini Lunch, one of my characters wants to make it as an editor in the world of New York publishing. Given that she’s a woman and the year is 1958, she encounters the kind of sexism you might expect when you watch an episode of Mad Men. Female editors were rare in those days, and most only edited cookbooks and children’s books.

Fast-forward to the present: nowadays this aspect of my plot would be unthinkable. According to a 2015 survey conducted by Lee & Low, women make up 78 per cent of publishing’s overall workforce, and 84 per cent of the editorial field. More and more, statistics show that publishing is becoming almost uniformly run by straight white women. This lack of diversity – especially the lack of minority representation in the business – is both puzzling and troubling. It is clear something needs to be done to ensure a more inclusive, diverse workforce.

But circling back to Eden, my thwarted female wannabe-editor in Three-Martini Lunch, I find myself curious about the current gender trend, too. It seems women cracked into the field and have taken over. But it begs the question: where have all the men gone?

I decided to ask my editor, Jake Morrissey, for his opinion. He is, after all, a man and an editor and therefore something of a rarity, according to the statistics.

I asked him: just for the sake of argument, let’s assume there is a set of men who would’ve pursued publishing back in the 1950s, but in today’s world are doing something else. What happened? Did they get edged out by their female competition? Lured away? If you had to make a wild guess, what are they doing instead?

He replied: “My guess (and it is a guess) is that a bigger paycheck in other industries has, over time, lured men away from publishing… men who might have been interested in publishing have tended to look for jobs elsewhere because they could make more money in other professions: the law, Wall Street, advertising, and other media (television, for example). Women have, too, of course.”

While Jake made it clear this was only an off-the-cuff guess, there is certainly data to suggest his impression bears out some logic. Publishing salaries are notorious for being stuck in the past, not increasing to scale with inflation or comparable professions (such as those Jake named). According to Publishers Weekly’s 2015 salary survey, an editorial assistant makes as little as $25,500, while a senior editor averages $70,000. Take into consideration that to work in publishing in the States, you must live in or near the New York City area, and suddenly that (coveted! competitive!) editorial position starts to sound less like a job and more like a passionate pursuit that comes with a vow of poverty.

The fact women have come to populate this industry to the point of making up its majority suggests they are not put off by the ratio of education required versus dollars paid. Or, if they are put off, there are other factors that atone for this lack of salary – such as placing a higher value on passion over pay, or even harbouring the expectation (either conscious or unconscious) that the salary gap will be bridged by a partner. Of course, without conducting a true case study, this – just like Jake’s guesses about why there are fewer men in publishing than previously – is mere conjecture.

But consider this: Two other facts consistently reported by these surveys are: (1) women’s salaries in publishing trail men’s by an average gap of $20,000, and (2) while women make up a whopping 84 per cent of editors, this majority drops to 59 per cent at the executive level.

If my character, Eden, were a real person living today, I would salute her desire to become an editor and I’d assume her gender wouldn’t hinder her chance to achieve this goal (as it almost definitely would have in the 1950s). I would, however, still warn her not to bump her head on the glass ceiling. The matter is clearly more complicated than simply whether or not the publishing industry has decided to let women in.

Three-Martini Lunch is published by Allison & Busby, at £14.99